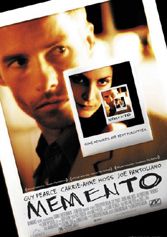 Memory-impaired Leonard (Guy Pearce) lives in a daze. The one-time insurance investigator suffered a head trauma during the murder of his wife and now thrashes around in a hostile dimension using notes and scrawls from before the incident to milk meaning from whispered bits of memories. He’s determined to identify his own life by solving the puzzle of his wife’s death.

Director Christopher Nolan (“Insomnia,” “Batman Begins”) tells the story in reverse, one of many tricks he deploys to expand an overly arcane plot. Leonard says he can’t be trusted; he’s too impressionable to distinguish real from imagined, past and present. A relationship with bartender Natalie (Carrie-Ann Moss) just confuses him further. Of Natalie, Leonard has previously written, “She also lost someone. She will help you out of pity.” Pearce is a haunting and haunted presence, but overall the ambitious Nolan may be a little too clever for his own good.