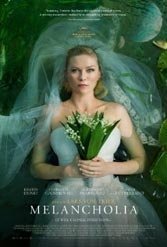 Justine is a walking fetal position dolled up for a wedding that can’t dislodge her from schizophrenic ennui. Her depression, the film’s part 1, allows von Trier to aim his cannons at the hypocrisy of ceremony (Justine feels nothing; her mother despises marriage) and the hatefulness of the urban workplace (she justly reviles her boss). Justine’s ample shortcomings established, her end-of-the-world omniscience with it, VT turns his attention to Claire, a horsy-set panic attack in waiting (she’s sculpted and dressed in the image of 1970s Patti Smith as photographed by Robert Mapplethorpe).

News that the “hidden” planet Melancholia, once ensconced behind the sun, will soon pass near to Earth, triggers Clare’s low-boil frenzy, which seer Juliet already dismisses as futile (“The Earth is evil. No one will miss it…”). Rational John spends most of part 2 calming Claire down and attempting to reassure their curious son: The giant planet, he insists, is just on a fly-by.

Nonsense, since so much Wagner in von Trier’s busy hands is a big bang in the making. The passage of time becomes a kind of opulent romanticism with sadness and madness feeding on intimations of doom. Melancholia, both planet and mood, infects the sisters Solaris-like, and the film’s last 15 minutes are palpably unsettling.

In some respects, the film is a strange art house version of 1990s disaster flicks such as “Armageddon” and “Deep Impact,” both of which took up celestial collisions. But what LVT delivers in girth (an intellectually rapturous mood) he fritters away through repetition. Though Dunst fierce stare gives oppression ironic beauty and Claire’s ashen face speaks for biblical hopelessness, the gorgeously engineered endgame matters more than the troubled people it incinerates.