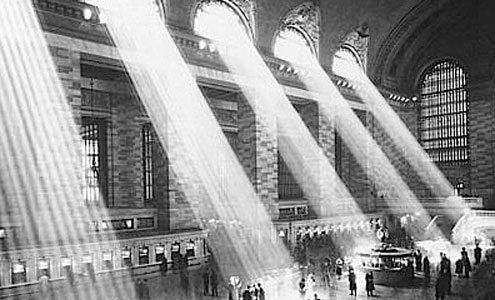 If all the porters looked as fine as he, she’d keep spending her rent money to ride in a Pullman.

From the start, hers was a life growing toward a moment. It began simply enough with the two choices offered at the orphanage: domestic drudgery or the nursing nightmare. Mae liked Nurse Mahoney and liked even more the idea of being taught by the first colored nurse, so she chose that. And luckily, Nurse Mahoney chose her too. The other colored girls who couldn’t stomach blood or couldn’t count to ten without stammering, had to learn to cook, sew, clean and clean some more.

Not that the nurses didn’t do much the same except on the human body. Sick bodies, dying bodies, old, poor wasted up bodies. Whatever, they had to clean them up and polish them off like a dusty table getting the buffing cloth. Still, it didn’t take Mae long to realize anything was better than cleaning some white lady’s toilet.

Just like that, a domino knocking into the smooth ivory of the next, she tumbled into life after the orphanage. First to Lincoln Hospital where she trained and worked harder than anybody should ever have to, then the to tuberculosis center where she worked still, and, today, to a conversation with Sally Fatten who’d heard from some other girl that Nurse Mahoney was dying, alone, in a free bed at New England Hospital where Nurse Mahoney had studied. Dying. Alone.

Mae went home, dug her rent money from the flour tin and some clothes and a bag later, went on her way to Grand Central. Stood in a line behind a man who leaned on a cane, and then she had a ticket to Boston. That quick, she spent her rent money to buy a ticket north. Some things, like Nurse Mahoney dying alone, had to be taken as they came. Some things, Mae thought later, just had to happen a certain way. Dominoes knocking into the back side of the next.

Joe was her porter. When she saw him helping a wobbly old lady onto the train, she thought if all the porters looked as fine as he, she’d keep spending her rent money to ride in a Pullman.

And that was before she saw the inside of the car. Then her eyes were all over the place, taking in the car faster than a bookie taking in bets. From the chandelier glinting above her head to the velvet plush sinking below her bottom, Mae had never seen a room, nevermind a train car, so nice. She felt glad all over knowing she got the best for her money. Nurse Mahoney was the closest thing she’d ever had to a mother and certainly the only person who’d ever told her she was good at something. Splendid was the word, actually. Nurse Mahoney said she’d be a splendid nurse. So if she was going to make the effort to say goodbye, she’d best to do it right.

Mae looked around the car again, and that’s when she really noticed Joe.

She caught him as he knelt to pick up one of the passenger’s shoes, and his face revealed itself to her in syncopated time. One, the creamy plane of his forehead. Two, the black slash of his eyebrows.Three, the amber eyes glowing in a way eyes shouldn’t.

When his gaze finally leveled and he looked down the length of the car, assessing his load, she guessed, he caught her staring. A corner of his mouth curled. Mae twisted to the window, her stomach plunging. She wasn’t a spring chicken but she was acting fresh and foolish anyway. That was the first time. Joe Ellis.

LATER, A MONTH maybe, she went to see him in one of the notorious porter dormitories. She’d made them a meal at her place, packed it like a picnic for a park, and now spread it on the dinky plates he’d stacked next to his hot plate. Mae watched the curve of Joe’s back as he burrowed in the trunk on the floor. The trunk, an old, cracked thing rusted at the hinges and edges, worked double duty she suspected. She imagined how he might look some evening, bent over one of her boxed suppers, as he ate and let his pale eyes shut with pleasure. Her cooking did that for him.

Joe cursed and started piling stuff outside the trunk. A pair of boots. Old newspaper.

She pressed her finger into one of the biscuits and watched the brown top cave under her tip. “The food’s still warm. Eat with me and let all that go.”

He answered by dragging the trunk toward the window where the lamps from the street shown into the room.

Why’d she even ask? Didn’t she know how these no longer soldiers went on about doing their time? How many you-shoulda-seen-me-thens had she heard while pulling a bed pan from beneath some tuberculosis wasted vet?

“You don’t have to show me, honey.” Mae covered the plates with the towel she’d had the food wrapped in. “I seen the parade just like everybody else.”

“You saw it,” he said, pulling his head up and looking over his shoulder at her. “But you didn’t see me now did you?”

No answer. He just turned back to his searching. “Hah!”

Joe was dragging something from the trunk.

“Look.” He stood and his great coat unfolded down the length of his body.

“Honey, you don’t have to prove nothing to me.”

He already had the coat over his shoulders and was slipping his left arm through as she stepped out of the corner he called a kitchen.

“You stay right there.” He held out one hand to stop her and fished in the coat’s pocket with the other.

He pressed the hat over his head and the green wool stretched and filled to his shape. His face was flushed, the color boiling up to his ears. “This was me. For two years, we lived in this.” He dropped his arms to his side and the coat flapped open, ballooning out around him.

He was too excited to realize how silly he looked.

And Mae, even then, was too far gone to tell him. Instead she stepped up to him and put her hands against the curve of his face. He looked at her, but his eyes were dark and somewhere else. “Joe Ellis, don’t bring that war in here. I didn’t make enough food for you and all those boys you fought with.”

She felt him smile before she saw it.

That was the third time.

ON THE TRAIN, that first time, she wouldn’t look at him again until they’d left the city behind and nothing but bare trees and snow dusted fields whizzed by her window. The blurred browns and whites had all but lulled her to a doze when a bright whistle cut through the car.

The white fellow across from her scrunched up his mouth and made to do it again, but Joe was there before him. “At your service, sir. You may use the ringer, if you please. There.” Joe pointed to a dime sized button below the window.

Joe took a step back, about to turn.

The man’s gaze fell onto Mae, who had turned to watch. “Mind you own, gal.”

His arrogance slapped at her composure, but she didn’t turn away from the aisle. She looked at Joe. And in the brief time it took him to back away and turn to get the man’s shoes, Mae had decided what she wanted.

The white man’s disdain, his rudeness, passed as regular as the day’s dawning. Maybe that, the commonness of the moment, made her cling to it, want to remedy it. Whatever. Reasoning out her emotions was no matter. What she knew was this: the white man’s inclusion of her in Joe’s casual humiliation had created an ally. This porter, this fine slice of man she meant to meet, would not end his day carrying only the pilings of service that he took on all day.

This was the first moment she shared with Joe. It would congeal at the center of their relationship, drawing together everything they created, holding them in an unchanging orbital dance, and eventually hardening the very desire that could save them.

— Chae Sweet is a writer and English instructor working and living in Jersey City, New Jersey. This excerpt is from the novel-in-progress, Joe Ellis. Set in the early 1920’s, the novel follows the journey of a woman as she tries to find the truth in her relationship with a Jewish man who was passing as black.

About the Author: Chae Sweet