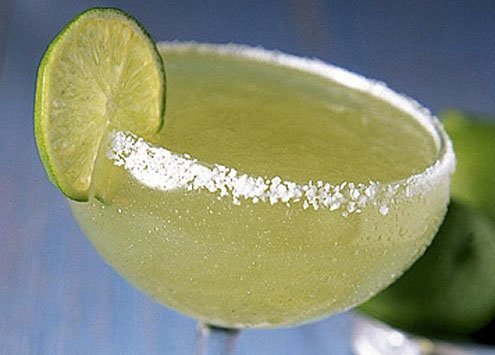 ’ve decided that alcohol is the secret to successfully introducing in-laws. The more drinks, the merrier. They ease pressure and awkwardness.

Over the holidays my boyfriend Fabio and I finally brought our families together — mine were visiting from Miami. We decided to host a family dinner at our place in Rome. To make an even bigger impression, I conspired with my father (his roots are Mexican) to make an authentic Mexican dinner to officially bring Calabria and Florida face to face.

Nervous as hell, we worked all day to get the house and dinner ready.

Fabio’s mother was first through the door, providing an early dose of culture shock. While my parents dressed nicely, Fabio’s mom was decked out in a big fluffy and furry coat with salon-fresh hair.

Our parents don’t have a common language, taxing my interpreting skills. Appetizers followed the greetings: Home-made nachos with queso fondido (a very spicy melted cheese made with jalapeno peppers).

Fabio’s dad (a health nut) pulled me over to the table. He reminded me that he did not eat the following items: Salt, sugar, coffee with caffeine, soda, gelato, chocolate, alcohol, mayonnaise, ketchup, mustard, meat, desserts and milk.

In other words, nothing.

He demanded to know every ingredient in the Mexican dip. Cheese and jalapeno peppers, that’s it, I told him.

Warily, he dipped in.

Next came the fajitas.

Fabio’s mom, still watching her weight, chimed in that she couldn’t eat much. I’d warned my father that she wasn’t big on trying new things. But when the frozen margaritas rolled out everyone’s tune changed.

Fabio’s mom’s third fajita (she’d never had one before) coincided with her third margarita. Fabio’s dad raised his glass (he’d also had a margarita or two) and announced in English, “Tomorrow the competition. Mexico contro Calabria. Tomorrow jooou try the Calabrian food of my wife.”

Though little was said, I felt like the first round had gone well.

The second came on Christmas Day, when family and I celebrate our first true Italian Christmas. That meant several dishes and a lot of fish. It also meant Italian time.

By 9 p.m. we still hadn’t embarked on our dinner odyssey and my father was getting edgy. My parents usually eat at 6. By the time we finally sat down it was about 10.

Dish after dish was served. I told my parents they might consider curbing politeness and not finishing everything. No luck. By the sixth dish — they’d finished each one, with seconds served — they looked alarmed.

But alcohol again saved the evening. Brindisi were made and dedicated to the families. As wine flowed, inhibition drifted away.

“Attore,” I said, completing her sentence.

Fabio’s father rattled off observations on Calabrian culture and poetry and waited for me to translate. As the only person at the table knowledgeable in all the languages being spoken (English, Italian, Spanish and Calabrian dialect), I thought maybe I could get away with editing some of his speeches. Who, I wonder to myself, talks about philosophy to people they’ve just met at a Christmas dinner, no less?

In English, I told my mom, “Fabio’s dad says he writes about Calabrian culture and poetry.”

Fabio’s father glared at me. “But you didn’t translate everything.”

He then began his own English translation. I was shocked. I stared at him and said, “Sei furbo. In tutto questi anni non sapevo che parlavi inglese.”

He laughed. “I know enough English to get by. I was just being lazy and really wanted to push you to speak Italian.”

Hmm… Interesting. Who knows what else he must have understood all these years.