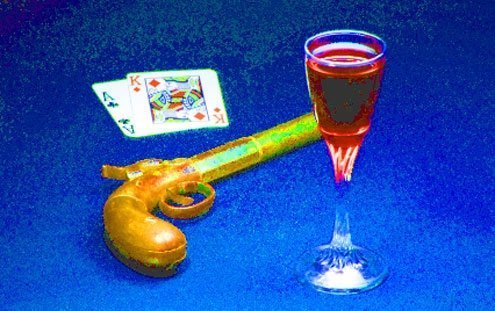 Valpolicellas — cheap, easy and spiced with sleaze. I hadn't gone anywhere near one in years.
M

y host that night was a man named Arturo Bellomo. He owned a hotel on the lake in Lugano, an hour or so north of Milan. A friend of mine had been shot in the head and I figured Bellomo knew something about it. Soon as I got there his sidekick called, said I wanted to see the boss real soon.

“News to me,” I said. I like to play dumb. It comes easily, and sometimes it makes people drop their guard and they let something slip I can use later on. So I was ready with the act when we sat down for dinner.

“Wine and watches,” I said. “And I dabble in crime, for Cronaca Nera Italiana.” A low-rent tabloid published in Rome. But he knew that already. He knew who I was.

Bellomo nodded but said nothing more. I looked him over. Sixty something. Silver hair, dark eyes in a face that gave nothing away. I figured I must be there for a reason, so I nibbled on the sbrinz he’d dished up for a starter and waited for the line that would open the deal. A forgettable first course came and went but finally he smiled and delivered the pitch. “You’re wasting your talent, Mr. Pescatore. You should work for me.”

“Is that so.” I pulled on my deadpan and tilted my head. “And just what would I do?”

He grunted, wiped his mug with a white linen napkin, leaned back and called for another wine. I didn’t catch the name. The waiter disappeared and came back with a bottle, poured a sip for Bellomo and stood poised for the nod. When it came he served us and set the bottle on the table.

“Are you familiar with this one, Mr. Pescatore?” Another smile, darker.

I squinted at the label. A Valpolicella. My heart sank. The man had to be kidding. A stint on the crime beat in downtown L.A. had given me a taste for Italian reds. Most of them had been Valpolicellas — cheap, easy and spiced with sleaze. I hadn’t gone anywhere near one in years. Not since I moved to Milan.

I looked up. “Never heard of it,” I said. I leaned in to peer at the label again. The name: Il Bugiardo. Translation: “The Liar.”

I lifted my glass, swirled the dark wine, sniffed and took a sip. It all came back to me. The blood and rotgut years in L.A. I sighed and let the “Liar” surf my tongue for a while. It took a moment, but something changed. Not bad. It had character.

“What were you expecting, Mr. Pescatore?”

I shrugged. “Valpolicella has a lousy reputation.”

He lifted an eyebrow. White, unkempt. “You shouldn’t write about wine, Mr. Pescatore. You have a head full of old ideas.”

“Which is why you’re asking me to lie for a living.”

Bellomo leaned forward, lowered his voice. “I hear that’s what you do.”

I was quiet awhile; working my way through the roast baby goat, roast potatoes and greens. I sipped and swallowed. Getting better all the time. Coulda been Amarone.

“Of course not.” I smiled. And since the wine was right for the goat that night, I lied and told him I’d think it over.

I stayed on in the city for a few more days, talking to people for the headshot story. I saw Bellomo a couple more times. He did what he could to win me over. It got pretty nasty but it didn’t work.

I went back to Milan, wrote up the story about my dead friend and sat back in the end with a glass of red. An ordinary Valpolicella.

It was better than I expected.

In the back of my head I heard a voice that sounded like Bellomo. That’s all I ask, Mr. Pescatore. Be prepared to change your mind.

It wasn’t Bellomo. It was the wine in me talking.

Il Bugiardo is manufactured by Cantine Buglioni, a winery in the old Valpolicella Classico area north of Verona. We drank a bottle from 2009 that night: Valpolicella Ripasso Classico Superiore D.O.C. And what about the name bugiardo? One fine day, so the story goes, a visitor tasted the Buglioni ripasso and said, “If it isn’t an Amarone, then this wine is a liar.” Amarone is the region’s most notable red. The ripasso is regular Valpolicella after a second fermentation with partly dried grape skins left over from the fermentation of Amarone. Ripasso, aka double fermentation.