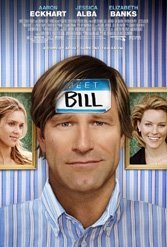 It would be nice to excuse this as parody-gone-wrong, but that’s too kind. Screwball comedy is the going description, which makes it all the more degrading. Dimwit husband of adulterous rich girl (Aaron Eckhart as Bill, Elizabeth Banks as Jess) tries to make amends for his nerdy idiocy and win her back. He’s hampered by a love for Snickers, donuts, and — most unforgivably — a noticeable paunch. Cometh a cool, mentoring-available teen to chart avenues to hipness (briefly via Jessica Alba).

If abasement and awful writing are funny, snort away. Super lowbrow Bill would be excusable to the “dim and dimmer” genre if it weren’t for the sight of Eckhart seeming to beg, at times pathetically, for a script that allows him to conjure up a character (the kind Nicholas Cage got in “The Weather Man”). Directors Bernie Goldmann and Melisa Wallack instead give him pearls such as “I’m a fat fuck!”, which more than sums up the guffawing tone of the movie.