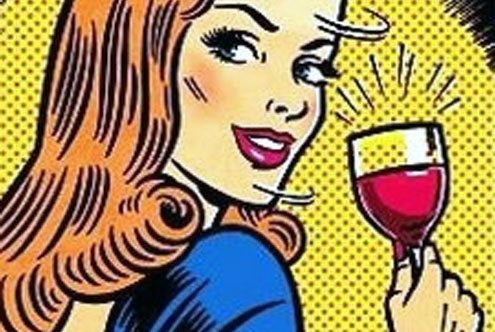 iving in Italy has taught me one thing about wine: people drink a lot of it. They know what they like, what it goes with, and how much it should cost. As far as I’m concerned, there are two kinds of wine: red and white. At restaurants I let my friends pick for me, and I either like it, or I don’t. The method is not without its flaws. What do I pick at the grocery store? Or when a friend comes to visit? Does red or white pair better with a romantic comedy on a Friday night in?

I decided to face this problem head on. I organized a wine tasting. Two of my friends are taking a wine tasting class and I decided to put them to the test, while trying to learn some pointers along the way. The date was set, three wines were bought, and I was given official Wine and Spirit Education Trust Tasting Notepaper to get me started.

The first wine, Chianti, looked delicious when poured into a glass. The first thing I learned was that you need to judge a wine by its color, particularly if you want to sound snooty. Was this red purple, ruby, garnet, or tawny? Was it clear or dull, its intensity pale, medium, or deep? I took a stab at it: “Jolly Rancher grape purple!” My wine-tasting friends shocked me into reality. “No, it’s ruby. Chiantis are famous for being ruby.” Oh.

How about the aroma? (To sound like an expert, say “the nose”) A long sniff and I immediately identified my first smell, “grapes, lots of grapes.” Unfortunately for my untrained nose, this was all I could think of, which produced stern glares from across the table.

My companions had better sniffing luck. Black fruit, leather, earth, butter (factoid: this means it was aged in an oak barrel), raspberries, currents, mushrooms, and green peppers. All this from a glass of wine? You better believe it.

After the nose had been analyzed I was finally allowed to move onto the taste. Instead of gulping my glass, I was instructed to take small sips and “chew” on them for no more than three seconds. Doing this would expose me to the optimum amount of pure flavors. After all the subtle sniffing, my first taste hit me like a tons of grapes. The wine was amazingly bitter, so much so that my tongue started to feel like the fabled leather they had smelled earlier.

Here’s something to impress with at your next party: though tannin and acidity are often confused, there is a big difference. Tannin leaves your mouth dry and can be a good thing. Acidity makes you salivate and is a bad thing. I learned to remember this by asking myself a simple question: would I like being dropped into a vat of acid? Of course not, because acidity is the bad one.

There is also the question of the body. Now, stop thinking about curvy bottles because this means the thickness. Think about milk when judging: does it have the consistency of skim milk, whole milk, or something in between? I said two percent, which they translated into snob-worthy term: “medium minus.”

The longer finish a wine has, the better the quality. Unfortunately for my taste buds, this one lasted forever, but at least I wasn’t drinking slop. Food pairing? Dark red meat or a very strong cheese, anything to lessen the bitterness of my glass.

Many notes, an hour, and two wines later, I pronounced the following line: “I’m getting some pineapple, maybe mixed with some floral hints.” It was then that I realized I was becoming one of them.

Wine has a lot more to it than its color. The way it’s grown, the stress the vine is put under, even the trace it leaves on the glass, can tell you a lot about taste.

I learned a lot that night, and while I now feel a little more confident about selecting a bottle of my own, I think the most valuable thing I learned is this: with a few vocabulary words, the ability to improvise fragrances, and a willingness to lie through wine-stained teeth, anyone can make a sophisticated splash at a party, even if you did just show up for the booze.

The Sounds of Wine