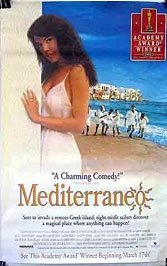 Early into World War II, a shipload of Italian Fascist soldiers are sent to scout a Greek island for Allied troops (“to observe and capture”). The sunny island appears deserted until local women, children, and older men slowly emerge from hiding. The soldiers establish themselves on the island, reveling in the food, music, sun, and women. But the war years pass, and three years later the soldiers hear that their one-time allies, the Germans, are now their enemies. When it’s time to return home, they’re downcast because they’ve become a part the place they were sent to patrol. One soldier falls in love with the town’s prostitute and decides to stay on.

In the touching finale, some of the wartime soldiers return decades later to reunite on the island, which is crawling with tourists. “Mediterraneo,” which won the 1992 Best Foreign Film Oscar, is a perfect, if simple, summer movie, with warm cinematography and a carefree spirit.

When the film came out to mixed reviews, one American critic blasted director Gabriele Salvatores for making a movie that “floats in a sea of sex” Strangely enough, there are no sex scenes (the prostitute is seen behind closed doors). The only nudity is of two clothed soldiers cavorting with a topless Greek woman under the sun. Too risqué? Times have changed.