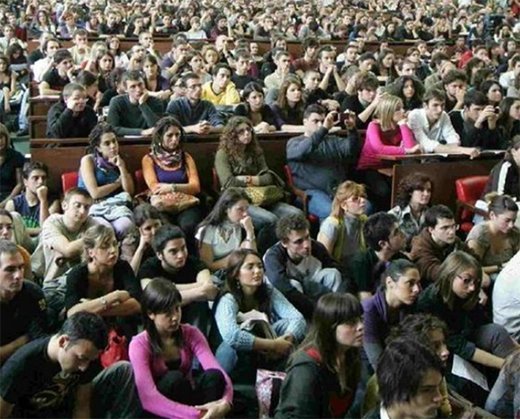 An Italian medical school lecture in 2014. If open admission is re-introduced, there may be no classroom large enough for the quantity of students.
W

hen I first moved to Italy, any high school graduate who thought they might like to be a doctor had the right to give medical school a whirl. Because of this open admissions policy, ten times more physicians were churned out annually than the country needed. And because there was no way those hordes of students could get individual attention from their teachers, and with far too few bodies for them to learn on, some graduated without having ever touched a patient. Literally. Italian medical training was so infamous that when the European Union began recognizing degrees and specializations across borders, Italy risked being the only country excluded.

The threat of that humiliation goaded Italy into revolutionizing its medical school faculties. By the year 2000 a selection system had been introduced —based on a multiple-choice test. Admissions were slashed by 90 percent and a new generation of students was learning the ropes at patient bedsides instead of just from medical textbooks. Italian medical training was making giant strides toward joining the rest of Europe.

Italy’s health minister is proposing that ER docs and GPs be hired fresh out of medical school, never mind residency or experience.

Now, 20 years after Italian doctors began their Long March from laughingstocks to world-class clinicians, the Italian Health Minister, Giulia Grillo — a physician previously known mainly for waffling on the need for vaccinations —is crusading to turn back the clock by reviving open admission to medical school. No more tests. No more selection process. Anybody who made it through high school would again be welcome. Come one, come all!

Grillo has even added a sour cherry on top: the downgrading of postgraduate training. She points out, correctly, that Italy’s sloppy planning has led from too many prospective general practitioners to too few. Training in emergency room medicine has lagged, she says, putting hospital emergency room staffing at risk. Her proposed solution? Stop demanding residency training for ER doctors and general practitioners. Instead, she wants hospitals to be able to employ anyone with on-the-job experience, including night staff (Guardia Medica). This assumes they will have picked up their trade through osmosis.

Even worse, she’s suggested maybe those ER docs and GPs could be hired fresh out of medical school. Anywhere in the world that would be a mistake, given the complexity of modern medicine, but in Italy—where medical school is still relatively weak on the practical side — it would be madness.

Already many young Italian medical graduates flee the country, headed for nations where they expect to get superior specialty training, higher stipends, and eventually a better chance at a real job. And Italian specialty training is already uneven, turning out specialists whose levels of competence range from superb to mediocre. If even that spotty training is made optional we’ll be having self-taught doctors handling heart attacks and accident victims. Poor Italy!

Pardon my rant. I’m not much of a Buddhist when it comes to acceptance, and the coronation of Donald Trump reset my indignation threshold. These days, even a relatively benign health minister playing with fire can get me going. Especially since her ideas are threatening to torch a house that was only recently rebuilt.