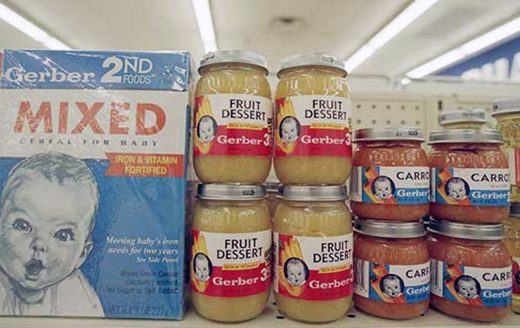 What's a smoothie but an up-market version of baby food mash?
T

he other day, after speaking at a conference and going out for dinner, I happened to pass a noisy and friendly family in the lobby of my hotel. They had heard my speech and invited me to join them for “a beer.” This was an understatement if there ever was one, since they were ensconced among several coolers and cargo-sized bags of popcorn and chips. It seemed like a quartermaster had been asked to reward a platoon returning from a long and arduous mission.

After stopping to chat, and skipping the beer and snacks, I headed for my room and reflected on their snack food: I hadn’t seen so much in one place since my children’s birthday parties in Italy.

Those memories helped me identify a subject I had been trying to put my finger on since I returned to the U.S. after living three decades in Italy —American eating habits.

The issue isn’t what I miss about eating in Italy, such as the choice of vegetables and fruit or really good pizza. Instead, it’s my “new” nation’s unfamiliar eating habits.

When I left the U.S. more than 20 years ago, Americans ate like adults. Now they eat like children. How else can you explain the following?

Smoothies: These purees of fruit and vegetables are nothing more than trendier and larger versions of Gerber’s baby food. That holds not only for their consistency, but also the underlying premise that icky, i.e., healthy things (like green vegetables) will only be edible if reduced to unrecognizable pap.

Sippy cups: Spill-proof containers that permit the consumption of sweetened beverages used to be limited to children, still unstable on their feet or given to throwing things from highchairs. Now, there are several adult versions of the covered cup with a sucking device. They range from the convenience store Big Slurp to the fancy water bottles yoga ladies tote around.

Picky eaters: Children once grew out of annoying their family, fellow diners and cooks with mono diets and weird rules. Instead of shunning any food that comes into contact with any other food on the same plate or just eating hotdogs, American adults now resist gluten and profess to eat only vegetables — or what they imagine their Neanderthal ancestors ate.

Bowls: Bowls provide aid and comfort to the opposite of picky eaters, allowing children to mash food together and eat it with a spoon.

Snacks: When I traveled long distances with children, sensible snacks helped with time zone changes that could interfere with the needs of small stomachs. Now, American adults seem unable to leave their homes or even have meetings without enough provisions to save the frontier-era Donner Party. Who wants to be stranded without donuts or muffins?

There are many reasons for the infantilization of American eating habits. It probably began with the permissive parents of baby boomers who never made their precious progeny grow up.

Junk food: America’s junk food consumption is associated with social class. The Whole Foods shopper would not be caught dead with Mountain Dew, Hostess pastries or Doritos. In Italy, the major difference between an upscale food store (Eataly, say) and a supermarket usually has more to do with price than merchandise mix. Italy’s answer to Hostess pastries is merendine, while chips are patatine. The “ine” is the diminutive ending — think bambino or child. A merenda is an after-school snack; patata just means potato. Adding the “ina” suggests the age group (small potatoes indeed).

On-demand feeding: Like those of newborns, American hunger pangs must be satisfied immediately, if not before. Americans expect the exact food they want to be available exactly when they want it, from all-day breakfast to 24-hour sushi. Such demands help fuel the national economy and define the urban landscape.

The “no thank you” helping: In America, the notion that the foods that are good for you are also unpleasant is sacrosanct. Adults believe eating kale earns them a dessert indulgence.

Playing dress-up: When we played dress-up as children, we assumed British accents and had imaginary tea parties with exotic princesses. Eating in an upscale American restaurant involves similarly naïf interpretations of foreign sophistication. The updated version involves balsamic vinegar on everything and pineapple bruschetta.

Birthday party food: In Italy, if you see pizza, chips and cake served together, you know you’re at a children’s birthday party. In the U.S., you know it’s a Super Bowl party.

No doubt there are many reasons for the infantilization of eating habits that occurred in my two-decade absence. It probably began with the permissive parents of baby-boomers who never made their precious progeny grow up. The trend trickled down via the next generation’s harried mothers and disrupted family schedules. The American religion of work also contributed. In a country where “lunch is for wimps,” snacks or a mess-free, in-a-bowl amalgam of all five food groups (eaten at your desk) may be the only choice.

And one last thing about the happy family in the lobby with their beers and popcorn: they were all dressed in tennis shoes, shorts and t-shirts. These were once considered children’s play clothes. I don’t know if there’s a moral to this story, but it does make you wonder.