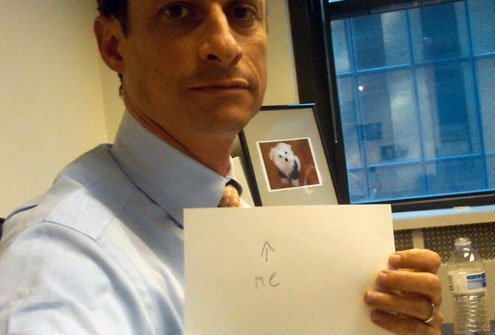 Anthony Weiner: "Me" marks the sore spot.
I

lived my pre-adolescent years among mischief-makers and petty vandals. I belonged peripherally to the mischief faction. I once locked a cat in an oven. The vandals upped the ante, hiding behind pine trees and tossing pebbles at passing cars or taking turns firing an air rifle at a corner street light. When caught, a rare occurrence, they’d put on “who me?” grins. These were the middle class lords of a burgeoning testosterone that acknowledged rules and restraint by mocking them.

Most grew from this phase into high school and girl-chasing, following a Norman Rockwell script that first primitively and then more clearly turned subversion into citizenship. Civil and pan-religious platitudes kicked in: look before you leap, do unto others, choose wisely, always own up, tell the truth. Industry and honor became mischief’s stalwart surrogates, knights ahead of outlaws. Mature social participation brought with it an awareness of discretion and restraint.

This didn’t stop political dissent, very public and mostly nonviolent, nor did it deter preternatural vandals, the majority convinced that civics existed to oppress or deter them. Some turned criminal.

In general, though, the pebble throwers and the cat-jailors were brought to their near-adult senses by the social conditioning of their peers, whose views mattered. Trickery would always be thrillingly phosphorescent, as would deceit, but a life lived at their behest would be messy at best. Boyish anonymity in the “who me?” vein couldn’t hold up if promises were to have personal and social substance. A popular TV game show of the era had the preachy name “Truth or Consequences,” which had less to do with its on-air antics than the social catchiness of accountability.

While I admit that I never stopped seeing cats as potential oven material (to play rescuer to my own tyranny) I never strayed far from my creeds of passage.

Not so for the likes of forty-something politician Anthony Weiner and his many adult counterparts, who though a decade younger than my yesteryear brood seem willingly susceptible to the subversions of social networking, without a doubt the most significant restraint-busting piece of technology introduced into human relations since the telephone.

The great plus of social networking is connection, much of it random. The great minus is an ironically pre-social framework, shameless by definition. Among those vulnerable to mischief, online connection revives any number of adolescent paradigms, including deceitful self-portrayals and the need for fair-weather “friends” to assure virtual ego and actual self-esteem. A greater “us” masquerades as the sum of tens of millions of “me’s,” constituting a happy fiction that convinces itself it isn’t.

Rarely do authority figures knock on anyone’s front door in the event of oven-roasted cats or broken windows. Truth is adjustable and consequences conditional.

For Weiner and his ilk, social networking is a means to reenter the teen world of suspended disbelief. Adulthood and its responsibilities (onerous at times) are set aside in favor of a virtual pebble field whose new-age ambassador can be photo sent to a stranger and potential sexual partner with a sign saying “me.”

This is less irresponsibility than pre-responsibility. The hormonal enthusiasm of the act of networking neutralizes the conditions created to encourage self-discipline. Bulging pants and pumped up breasts are quickly appropriated into a cinematic realm that encourages personal celebrity and fakes the disappearance of foibles and shyness.

Aside from my cat-in-the-oven adventure (which the wise cat never forgave), I also shoplifted. I stole toy soldiers from the local drugstore and, guilt-ridden, buried them in my family’s back yard. The stolen soldiers brought me no joy aside from the rush of nine-year-old robbery. It was an early lesson in paradox.

One afternoon a limping man appeared at the front door. He was the store’s diminutive manager who always kind to me when I shopped with my father. After repeated and ardent denials, some of them spectacularly improbable, I sobbingly dug the soldiers from their graves one by one as neighbors watched. No one said a word. I was left instead to the silence of my own embarrassment and the month-long humiliation, and punishment, that followed. What I learned was simple: While toy soldiers might always be available for the swiping, my honor couldn’t stand another assault. Nor would I expose it to further siege.

I never tossed aside a lesson that 21st-century blitheness daily puts jeopardy, to the not-just-Weiner detriment of all.