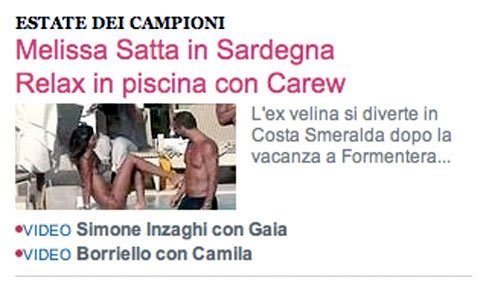 Gazzetta: Sexual and soccer priorities in their "right"places.
O

Instead, the only women in sight (and abundantly visible) were beachfront babes in skimpy suits flanked by celebrated male soccer players.

Italy is fascinating in that way. So is its sports journalism.

When Italy’s women fare well individually, or when their volleyball or water polo teams excel (which is often), Gazzetta broadcasts proud if vaguely condescending tones. These are Italy’s women, it says. They are ours and not yours. Be very jealous.

Even tennis veteran Francesca Schiavone’s unlikely French Open title run in 2010 and 2011 near-double was followed with enthusiasm. Since Schiavone is the tomboy antithesis of Loren-Bellucci standard beauty, papers took a different tack: Here was Italian true grit, and from a girl, no less. Take that, world!

Only team soccer, specifically women’s team soccer, unsettles Italian men in a “don’t go there” way. When the United States won the women’s World Cup in 1999, delighting the U.S. (90,000 watched the final) and making a media splash, Italy focused only on the (white) players who looked like swimsuit models. The sexual asides weren’t even veiled. Sex was the buffer that avoided lumping women’s soccer with the male kind, the real kind, whose potent fan base, blue collar and intellectual, controls the kinships structure of Latin life and perceives change as potentially castrating.

Soccer the supplemental source of testosterone the Italian male world uses for metaphor and fossil fuel. Collapsing soccer’s gender apartheid would be tantamount to open-ended acceptance of homosexuality: It’s embarrassing and vaguely unsavory.

Imagining women play soccer means positioning them in a system of male camaraderie and vulgarity that breaks with a fundamental vive la difference ingredient of Italian culture. Soccer players sweat, spit, toil, make millions, and then go to nightclubs to pick up and mate with starlets, who occasionally become wives. Women fans, even extreme ones, are tolerated, but only as genderless mascots within a male tribe. Stadium soccer is not a family affair.

Why then do successful Italian women’s teams in volleyball receive greater largesse? In part because volleyball is a secondary sport, whose popularity is largely northern, and whose female contingent poses no threat to soccer’s alpha tyranny.

Italy’s women’s national soccer team is modest, under-funded, and rarely mentioned. Unlike France, Germany, England and the United States, which have largely left gender out of promoting women’s soccer, Italy gladly brings up the rear, a sexual pun it would no doubt revel in.

Italian men, brought up by controlling women, are unwilling share the power, tactics, cunning, and corruption they associate with championship-level soccer. To do so shake up a culture that puts motherhood first and slides the rest into a sexual ditch.

If Italian women competed globally in a sport of male propriety, and did so successfully, arguments against their equal presence in other alpha pursuits, including politics, corporate leadership, economic management, would grow more tenuous. Soccer is the Italian male world’s last bastion, a prized bunker.

What non-Italian see as culturally sexist, insiders defend as a “natural” gender hierarchy that protects a stylishly separate-but-equal view of women in which a Madonna would no more play attempt to play championship soccer than a man would learn to shop and iron.

There’s no apologetic waffling, no rationalization. When it comes to soccer, Italian men embrace a Christian variation of the Islamic view of a woman’s place outside the alpha universe.

The outlook spills into sexuality and the meaning of transgression. The sexual antics of politicians fail to gain serious traction unless they’re tied to established perversions (read gay). Fallback positions on family still suggest that boys will be boys until they’re men, after which they marry and produce children who are schooled and trained by no-nonsense women, who at that critical juncture become the real and dominant alphas of the Italian snapshot, rearing boys who later become men.

The same men who refuse at all costs to relinquish their possession of soccer.