Me and my monkey 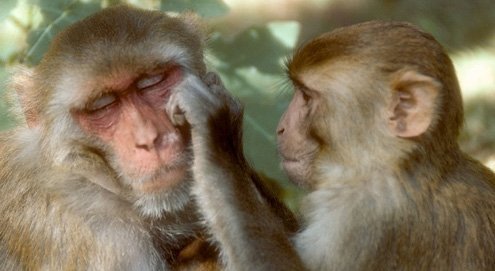 n 1999, my friend Amit was a guest star on a god-awful American TV series called “7th Heaven.” He played Curtis, the neighbor whose pet chimpanzee is found by young Ruthie in Season Three’s episode, “The Voice.”

Four years later, he reprised Curtis in an episode called “Monkey Business” in which an older Ruthie learns responsibility by baby sitting the chimp.

The Curtis character was amusing, inspiring many pitchers of Old Fashioneds at the Four Seasons’ Monkey Bar. Monthly, Amit and I claim our corner table and ponder over why the show’s only ethnic, handicapped character was an infrequent character, why the character’s name was so vanilla, and why poor Curtis’ housemate was a chimp.

The choice of chimp as a pet had us stumped. What was Hollywood’s obsession with primates? Over the first round of drinks, we’d compile a list of the very best chimps and apes (monkeys, too; which are not primates) in television and on the silver screen.

Second Place: Clyde, “Every Which Way But Loose,” 1978 — How hot is Clint with his orangutan?

Third Place: The entire cast of “Planet of the Apes” (both the Charlton Heston original and Marky Mark version).

The second round of drinks saw the conversation turn from sardonic witticisms about biped co-stars to introspective dialogue on chimp-pimping. Wasn’t it wrong to promote apes, monkeys and chimpanzees as house pets? Were they even legal pets? We didn’t know anyone (human) who had actually lived with a chimp. All we knew was what television told us: chimps and monkeys are loveable, funny and smart partners in crime and friendship — getting you out of jams as much as getting you in them.

The reality is that monkeys and primates in captivity are not the easiest pets, or guest stars. In celluloid, Marcel the Capuchin Monkey (“Friends,” Season 3) was clever and cute, but off camera he failed to “bond” with the cast. His character was not renewed at the end of the season. Likewise Amit and his chimp co-star never had the time to get to know each other, and Amit didn’t particularly like the animal. They were thrust together a few minutes before shooting, with an animal trainer telling Amit to refrain from unnecessary hand gestures lest the chimp misunderstand.

Monkeys and primates in general are not ideal pets — whether on Hollywood Boulevard or Main Street. Unlike the Hollywood monkey, store-bought pets are not professionally trained. Before getting the bright idea of buying one for home entertainment or as a replacement baby, you should take a few things into consideration: Monkeys and chimps are smart, possibly smarter than you, and like humans, they have long life spans.

What this means to a potential owner is that they are challenging animals that require a lot attention and discipline — in other words, laidback cat and fish owners need not apply. They can be messy, aggressive and hungry, often having special dietary and medical needs. Monkeys and chimps are lifetime commitments, similar to having children.

Usually between the second and third pitchers, Amit and I pomdered the legalities of primate ownership and the matter of endangered species. This was pre-Blackberry so we couldn’t drink and Google.

Later, I discovered that certain primates are endangered, so the desire to own a monkey or chimp contributes directly to drastic drops in their population. Think about it — demand means a supplier, regardless of scarcity. Because monkeys, apes and chimps are categorized as “Exotic Pets,” most countries have ownership laws.

The best advice to give a potential primate owner is research before purchasing, unlike the Maryland woman whose monkey Armani was taken away by the state as it was purchased after an October 2006 law went into effect stating that monkey ownership was illegal.

By the end of the third round of drinks, Amit and I were campaigning for primate rights with the Four Seasons favorite escorts who were all, not surprisingly, Jane Goodall aficionados. Another typical evening in Los Angeles.

— For more, have a look at Exotic pets, Discovering Chimpanzes, and National Geographic.