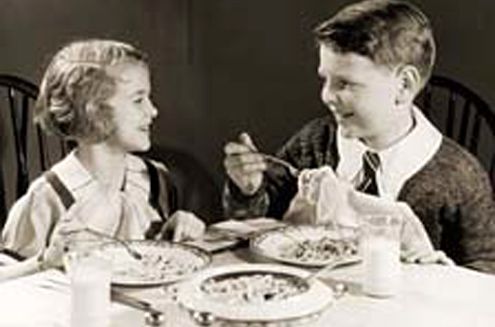 But it always came back to the food.
I

n fourth grade, my mother — who usually picked me up at the end of the day — sent me to school with a note. I was to go home with Daniela Confalone, a classmate.

I have no idea where my mother went that day or why she didn’t just send me home with one of my friends.

Daniela and I barely knew each other — even though we were among only eight girls in my fourth-grade class at Saint Joe’s. But for no clear reason, we avoided one another; perhaps we preferred friends who were less like us — the ones with freckles and blonde silky hair, who ate peanut butter and jelly sandwiches for lunch, whose mothers owned coffee makers, not metal stovetop espresso pots.

Throughout childhood, I’d been pretty certain that I was the only one like me. Something about my thick dark curls, which could never really be managed (other girls got to have side parts and wear dainty barrettes), the rapini sandwiches my mother sent with me to school, my inexplicable knowledge of the difference between squid and octopus, even at the age of ten; all of it — simply and obviously — set me apart. I didn’t know how Daniela Confalone fared alone in noticing these things, or if she’d even experienced any of it at all. I never asked. But when I arrived at her house that afternoon and sat with her silently at the kitchen table, watching her mother fry zucchini flowers for our after-school snack, I was pretty sure she felt it too.

Daniela and I were the only two Italians in our class.

But who at age ten wants to discuss such things? It wasn’t until years later, during some of my first trips to Italy, that the strange sensation I’d always had in connection to Daniela Confalone could now be applied to a whole country.

At a dinner party one night with a Roman hostess and several stranieri, I found myself inside that strange encounter with something familiar that I’d previously thought was mine alone. Was I a stereotype?

With all of us sitting around a large table, conversations lighting up between couples and among larger groups, things were comfortable and fun. We sipped our aperitivo and snacked on marinated peppers, artichoke hearts, olives. Many of us hadn’t been previously acquainted; about three-quarters of the dinner guests were Italians, the rest of us — me and an Australian couple — stranieri.

There was nothing formal about the evening. Mostly things had been thrown together at the last minute, but we were all enjoying ourselves. Close to eleven, the first course arrived—the hostess and a friend of mine had been in the kitchen most of the night.

Thick plates of steaming pasta were set down. We were starving. People rearranged themselves to get back to their seats. Bread was passed, a few toasts, buon appetitos uttered . . . and then the fussing. That’s how I tended to think of it. I might not have even noticed it, but the Australians chimed in, laughing. “Oh,” they observed, seemingly proud of their discovery, “so it’s true what they say about Italians. They do talk about food while they’re eating.”

I stopped my fork mid-air, peered up at everyone, and grimaced. And then I surprised myself by feeling a little offended. I thought, Of course we talk about food. What else would we talk about? And that surprised me too. Was I really in this deep? My mind scrambled to think of recent occasions when I’d not spoken about, or been with someone who’d spoken about, the food in front of us. I panicked. I was quite sure I’d had a meal where the conversation didn’t involve food . . . had I?

I bit my lip and felt a little exposed.

I’d heard this one before, but I’d never realized how much I’d been a participant. Family dinners for as long as I could remember always involved a discussion about the meal (along with speculation on the emotional state of the person who’d cooked it), analysis over the consistency and texture of the sauce. Had it always tasted like this or was there a time when it was a little more cohesive? Christmas Eve was the big one. Where’d we buy the fish, how much did it cost, and what happened to that guy’s wife anyway? Of course, things veered … to politics, to gossip, to jokes.

Really, What else would we talk about?

I wondered if Daniela Confalone would’ve felt the same.