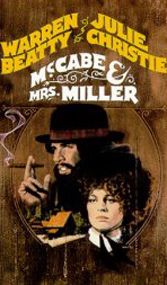 A triumph of hues and idiosyncrasy, Robert Altman’s American West is asleep in a sloppy mix of pastel grime, spilled alcohol, and splinters from town and church-construction. McCabe (Warren Beaty) is naïve businessman and a vulgar romantic who thinks he can found a small town just by laying down the pieces and clapping his hands. Mrs. Miller (Julie Christie) is a whore and brothel manager doing her managerial time in the hinterlands while seeking a way back to San Francisco. Opportunusm and hard luck throws them together.

The movie is about the limits of loyalty and the consequences of sentimental decisions. The West’s good guys — McCabe plays it cleverly but generally straight — inevitably usher in an equal and opposite unscrupulousness against which American optimism is no defense. Bluffs called and loans called in, they’re on their one.

Sure, maybe they get the girl — usually a sweet or hard-hearted whore, and Christie is a brilliant foil to McCabe’s deepening despair — but conquest cometh before the fall, as it does here, opium-puffing the dead-end antidote.

Not necessarily a great film but a unique and necessary anti-Western framed with unrelenting graininess by renowned cinematographer Vilmos Zsigmond and made all the more vivid by Leonard Cohen’s singing.