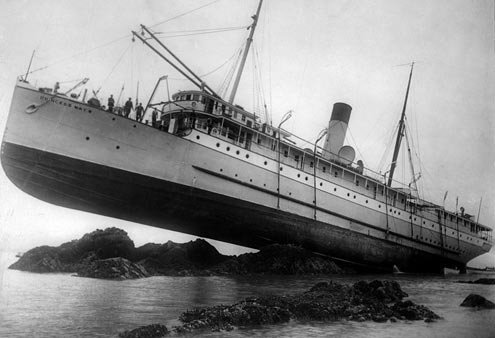 If only the "Princess May" had run aground in May, not August.
D

islike of poetry can lead grumpier months to throw dirt at April. Why should the cruelest month hog the spotlight, particularly when May hosts fonder memories? Or so says May. Let me count its ways, or some.

In May 1978 I was at lunch alone at a Rome restaurant called The Pot when I heard on the radio about a body in a car a few blocks away. The body was that of a former prime minister who had been kidnapped and killed by terrorists. Soon I’d forgotten about the pasta and was working late into the night, that one and many more to follow.

What May most remembers instead is that the day it made was beautiful, hand-crafted as always, with the right doses air and boxy cars positioned to scurry over the cobblestones, pressing down hard, cars instead of horses; a sign of the times. The rest was commonplace, at least to May.

In May 1985 on a slow boat to Capri I was conducting an illicit love affair when all stalled under the sun, the boat’s motor dead. Then came the loudness of the angry passengers, and annoyance of my companion, which in a few hours brought the moon, and arguments, some of them loud. Secret exposed, the love affair would end a day later, as would a deeper bond.

What May most remembers is how it placed Vesuvius in outline for all to see, unmoving for hours, well into twilight, an empty hot hill for then and thereafter, with perfect grooves, a relic and a hive. The rest it didn’t see, or ignored. May is aloof.

In May 1994 I was watching a race on television in which the man in the lead car was the man I least liked but most respected. He drove especially fast because he had that gift and was recklessly inclined, passionately determined to win as often as possible. Then suddenly his car didn’t turn, and a wall wouldn’t budge, and I stood up startled and forewarned.

What May saw, and felt, was how a breeze can tilt a day into warmth until the throttle is jostled slightly, and trees sway, to which rain can be added, or an even wind, depending on the menu’s ingredients and the hand that stirs them. May has many menus.

In May 1996 I met a girl in a New York restaurant. She was arguing with her roommate about Europe. I was reading a newspaper. My hands were inky and my spoon sauced. I paused to correct their mistaken geography and fell in love, as did the girl, so that we surprised each other, eloping into each other.

What May had in mind was how it grows greens, which are served in the salads that come and go, whole centuries of them, gently constructed from groomed plants and a sun it flirts with. All the rest, including love, May knows nothing little about, and usually disowns.

In May 2004 a gecko entered the room where I was sleeping near the seashore by the city, soon joined by a second and a third, a whole legion in fact. So that when I woke midway into the night the ceiling seemed made from them, suction on its back in unison, with such huge eyes.

May, by dawn ensured they’d gone, returned like toys to their box, this in accordance to a wider timetable.

In May 2021 I died in a dream. The restaurant of my death served pasta like the unfinished dish at The Pot, but this time I didn’t move, the me of the dream among many knives, forks, spoons and sweets, with candies everywhere, and a volcano above the kitchen overlooking a giant bay of ocean liners. All this happened in a city called Telefonica, which I knew from the beginning had to be my final stop, and the train’s, since the next came the open sea, my destination, until I awoke to another May.

As for May, today’s May, it simply yawned and began anew, not thinking about much of anything aside from renewed joy at the pleasure of its own company (me again!) and delight that the handfuls of dirt had worked, April was gone (what a useless clump of days!) and that it had only itself to thank, as always.