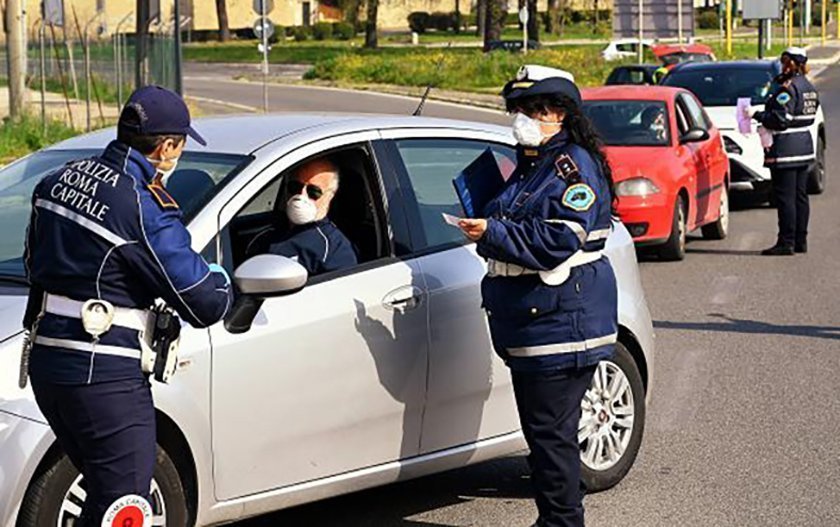 Give me one good reason why I shouldn't send you home. No, wait, make that three....
H

ere is a Rome corona-anecdote whose numbers will one day fill volumes and be wryly recited.

My plumber Max cannot work. He lives in a hamlet outside Rome and whenever he tries to go out on a work call is stopped by local police who have taken up permanent position on the one road that leads from town.

Each time he and his brother Claudio attempt to drive somewhere to fix a leak or rein in a kitchen flood he is told his mission is not essential, to go home.

Two weeks ago a client called to report a large ceiling leak. Max was told to go home, the client could surely figure out a creative way to solve the problem. Another time he was called to repair a hot water boiler. His client was frantic and without hot water. The police informed him there were emergency services she could call. An “authorized” technician with a police pass could, if necessary, replace her boiler. But that would cost her hundreds, he protested, and a new boiler probably wasn’t even necessary. That, replied the on-duty patrolman, was not his concern.

He’s working class to the core and easy prey for the police.

The saddest occasion came when the two brothers were stopped and asked why they both needed to go. Because I have diabetes and fainting spells and cannot drive, so my brother drives, said Max. Many people have diabetes and are fine was the response, and back they went.

Max is a big and burly man. He is an Italian Jew with a nimble mind, who doesn’t look the part of an intellectual or a poet, though he is both when it comes to understanding the capricious nature of water. He’s working class to the core and easy prey for the police in what beneath the surface is class one-upmanship, since both police and plumbers come from modest roots. Those with little power, and Italian city police qualify, are now lords of the streets, and with their brethren carabinieri, the paramilitary police, enjoy graced times.

They enforce social distancing (assuming they find anyone on the streets) and occasionally stop people to ask questions. As a result, the few who are out and about walk briskly, like world-weary characters in a neo-realist film. All is menace, best to make haste.

The shadow of the virus is soaked in small and long-buried social rivalries. Those who’ve been on the fringes of authority now feel emboldened, uniforms mattering as they did in the 1930s. Police have renewed purpose and vigor, a civic plus if only the circumstances weren’t so bizarre and the ultimate consequences so uncertain. In 1930s style, no one talks back or disputes what they’re ordered to do or not do. A virus is not like a war, in that it’s assumed uniformed authorities are assumed to be benign, working to protect, not imprison.

It is much about clout and control, those who have sheepishly lost it and those who wield it for the “common good.”

In this time of presidents quarreling with their medical chiefs few on the street make waves.

Max believes the virus is a plot the higher or bigger monied powers have hatched to rearrange the status quo ante, though to what end he doesn’t know. These days he speaks softly, unlike him, and sometimes sulks. He has given up trying to go out.

Tell the police you are assisting a nearly blind man, such compassion they will not refuse. They do.

His last effort came a week ago when I called him for help. He explained his predicament and I hatched a plan. Tell the police that you are assisting a nearly blind man, and carry with you a banana or a case of mineral water, even some bread. Such compassion they will not refuse, I claimed.

But they did refuse. True, Italian police come mostly from the family-snarled deep south where an ailing man living alone without nearby relatives to call on — a seventh-cousin, say — is unimaginable. It sounds too much like a Sasquatch legend or a trick.

The nearly blind man should have live-in help, or a kind neighbor (I don’t), and water. Bananas, and bread are not the stuff of emergencies.

Max even threw in some pasta, to no avail. Who would cook it? asked the officer. Max was speechless.

So he went home, and I nurse my kitchen leak with rags and a bucket, neither of which I can hardly see.

The world will not continue this way, I know. Some version of the normal will return, though in Italy not before summer or beyond. How Max and others like him will get by, all the while slipping from lower middle class to semi-poverty, I have no clue. As medically wise as keeping Max and billions of others in check, the underbelly of the effort stinks of Dickens-like wretchedness.

But since the walking wounded don’t end up in intensive care units, the many wash their hands — again and again. Just today, I thought of getting Max some cash. For food, for bills, for anything that might help out. But he can’t come to me and I can’t wire money since he lives below radar, no bank account to his name and no smartphone apps at his, or my, disposal He’s old school, as am I, and in more ways than one we’re both in limbo.