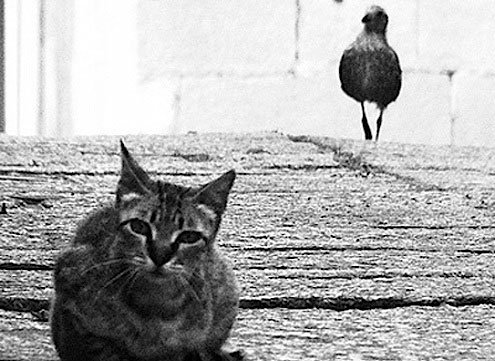 The secretary turns to the engineer: “Well, we can’t talk to the cat…” Mica possiamo parlare col gatto…
I

n Rome, you “assist” at a scene. Assitere. You also “assist” at a reading, a demonstration, a concert. To “go,” to “do” — no, not so fast: They declare involvement. You’re vulnerable. You keep them in abeyance. Assisting or not being present (action’s passive voices) better suits the indirectness of the south.

On Monday, I “assist” at a condo meeting. A pipe is broken. Water leaks into a courtyard, dampening the mantle of a tenant’s windows. He is incensed.

“This is not possible,” he shouts. Non è possible.

In southern Italy you do not say, “Fix this.” Not at first.

What matters is expressing appropriate indignation so that someone else, preferably an authority figure, introduces context and proposes resolution. Indignation and shaming, the old clocks of rhetoric, fuel indirect speech. So does modulation. A libretto of responses, rehearsed for centuries, is mistaken for spontaneity.

The tubing in the building, says the meeting secretary (tubatura), is shocking. “We must get an estimate.” He slowly and sympathetically scrawls the word in a notebook and says aloud, “…estimate” (preventivo). This is a ruse. Pipe man, watching the notebook, is nonetheless impressed by the act of inscribing and grows quiet.

Later in the meeting, a woman objects to a petition circulated about dog droppings.

“If this is about my dog,” says the woman, “the petition is shameful.” Una vergogna.

“No,” says the meeting secretary, “it is not about your dog.” He knows that it is.

“Each one of us has an obligation to assume our responsibilities,” he tells the woman and the group.

The woman goes silent. This phrase — assumere le proprie responsibiltà — is code for “no one is specifically responsible but all should look like they are paying attention.” She’s been handed an exit strategy, a face-saver. The petition is withdrawn but she’s been served.

Next comes the thorny matter of parking spaces. Some tenants let family and friends use their assigned spaces. Others, unable to find a space, temporarily leave their vehicles (SUVs are immensely popular) in front of parked ones.

A heated argument breaks out. Children and school is mentioned. So are the rights of the elderly. Insults begin.

“This,” he says, “is less a matter of regulation that one of correctness.” Correttezza.

Correctness is a hieroglyph introduced to mitigate disobedience. Disobedience is permitted contingent on humbling: You allow a nephew to park illegally, you explain, so he can visit his ailing mother. Have a heart. This is family intimacy militarized into defense. Feudal rationalization, often dishonest but culturally unassailable, can tame a mob.

The offended parking spot owners reply in their own code. “OK. OK,” the say in unison, “but let’s not exaggerate.” Non esageriamo.

Exaggeration means behavior so blatantly out of line that to accept it unchallenged is tantamount to establishing a permanent condition. Those told to “not exaggerate” have also been warned.

The last agenda item is Matilda the Cat. Matilda belongs to the proprietor of a nearby building but makes her home in the sun-baked parking lot and among the ample clefts of bushes and grass.

“That cat” — quel gattone — says an engineer new to the building, “is a menace.” Una minacia.

“Public enemy?” yowls a third-floor grandmother, “how is it possible that the nice cat is a menace?”

“Madame,” says the engineer, “that creature leaps onto to my car.”

It’s true, Matilda parks sleepily on the roof of his BMW, a shiny auto-boat the engineer treats like a trophy bride.

The secretary turns to the engineer: “Well, we can’t talk to the cat…” Mica possiamo parlare col gatto…

“Matilda is a good cat,” says the third-floor grandmother.

“Oh, that Matilda,” says the secretary, suddenly aware of the identity of the interloper. “Matilda means no harm.”

“It is a discourtesy to let the cat be free when the dog is constantly offended,” announces the dog-owner. Una vergogna.

“Everyone here must assume their own responsibilities,” shouts the engineer. He points to the secretary: “Write down that I lodged a protest against the presence of the cat!”

“And write down that I am offended by the petition about the dog,” says the dog-woman.

Now, everyone shouts. The secretary has lost control of the meeting and chats with a tenant about summer vacation plans. The secretary is headed for a safari in Kenya. The two ignore the sonorous bickering.

In Italy, you “assist” at a scene. That’s because social intercourse is passion’s hatchery. And if it doesn’t happen fast, be patient: Await the cat.