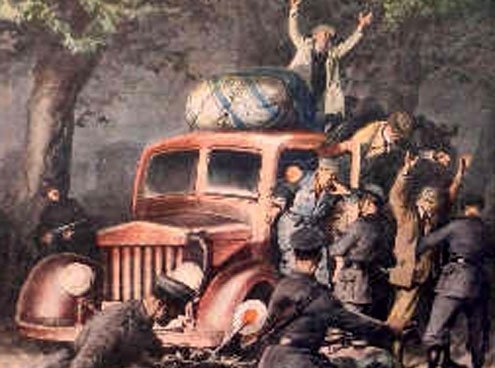 I didn't want that some bandits get the money.
A

girlfriend in New York has a swanky job for a woman’s magazine. Until recently, she was a mother of two and the family breadwinner. I say “was” because she recently had her third — child, not loaf of bread — and three weeks after delivery was back at work. That was her maternity leave.

I am freelancer. Though I buy the bread, I don’t “win” it. I also live in a culture where I’m entitled to 80 percent of my salary for five months after giving birth. I can’t complain about amazing coverage.

But I will. Because I can.

Last week, the Italian Post Office sent me a note telling me my maternity pay was ready. I saw that the payment zone was out of my zip code by a digit. Easy mistake. Since the Italian Postal Office (which also functions as a bank) is national, I presumed I could go to my local post office and get the check there.

I arrived shortly after 9:30 a.m.. My older son was at nursery, my youngest sleeping in the stroller. I took a number. And waited.

When my turn came, I explained my predicament to the teller. She understood and thought, like me, that I could get paid on the spot. She sidled off to speak with her colleagues. My son still slept.

She returned. “You have to speak to her,” she said, indicating a big-haired woman in black with lots of sparkly junk jewelry. The woman had clearly put a lot of thought and effort in to her “look” — not my style but you have to admire the commitment.

The big-haired teller was helping an ancient Roman couple open their first credit card account. The couple was six feet tall — in combined total height. One foot in the grave didn’t stop them from wanting to know about their credit rating. I waited patiently. The old lady found the time to say, “Your son is beautiful. Don’t wash him with soap you buy in the supermarket. It will ruin his delicate skin.”

Thank you, I replied. She turned. Paused. Turned again and said, “E non la Johnson e Johnson, signora!” Got it. Thanks again.

Finally, I explained my situation to big-hair. After big-hair came a supervisor, who investigated further on his computer.

“Signora non c’e.” They didn’t have my money. Not at this branch.

Was it possible, I asked, to have the money sent to my branch so I didn’t have to go to the other side of town? An effective and easy solution, I thought, since the error was theirs, and sending things is what they do. They are the Post Office.

Mr. Supervisor didn’t like the question. “If you want to get paid,” he said, “you will go where you have to go!”

So I went. I got a sitter. I even looked on a map — because I hate our GPS. I drove in the car alone (I did have Lady Gaga keeping me company) and arrived at my destination to find no parking for what seemed like a 10-kilometer radius. So I parked on the sidewalk. That’s right. On the sidewalk, people. I felt very Italian. I walked three blocks to what seemed like a construction site. Turns out, the Post Office is big into remodeling. This office would not be my pay-day.

Back in the car I said “Mother F*$#@.” That’s right, the F-bomb. Dropped more than once. Don’t judge me. There were no kids, only Lady Gaga, and I think she’s heard that one before.

I got out my map and got ready to go to the next possible pick-up location.

But first I called my husband Marco to complain.

“It’s a very bad place. Worst than the Bronx.”

“You’ve never been to the Bronx.”

He persuaded me to wait until Saturday when we could go together.

“If it is so dangerous, why are we bringing the kids?” I always ask important questions because, quite frankly, I am a really good mother.

He didn’t answer, but I didn’t care, because I was picking up a big chunk of change and spring shopping would follow.

Marco stayed in the car with the kids while I went inside.

I took a number (again).

When my turn came, I handed the teller (clearly the big-haired, sparkly lady’s cousin) the documentation. She made me show her ID and sign something.

She then opened a register drawer, counted out €500 euro, and walked away. But she owed me more.

“I think she might be paying me in cash.” It was statement punctuated with a question mark.

“With a check! It’s thousands of dollars!” I exclaimed.

“Whatever!” I was annoyed and nervous.

“Call me when you are ready to leave.”

“Look at me,” she ordered, “and watch me count. Do you have someone coming for you?” She seemed nervous.

“Call them and tell them to come.”

“Stick it in your pocket quickly!”

I followed her orders, turned to leave, and saw Marco’s lanky body propped against the open door. He was waving me over. I think he was sweating.

“What are you doing? Where are the boys?”

He shuffled me off. I’d never seen him move so fast.

“Don’t ever leave them in the car alone!” I scolded him, sitting down in the passenger’s seat.

“I didn’t want that some bandits get the money.”

“BANDITS?!? They can have my money but not my kids!”

“Put the money in your bra!” he ordered. The morning was filled with orders.

“Why?” I pulled out the cash, and he grabbed it.

“Never mind,” he said, shoving it down his pants.

The bandits never showed. The high-risk pickup was complete. The money, my baby money, was all there. Next time, though, I’m bringing my own muscle.