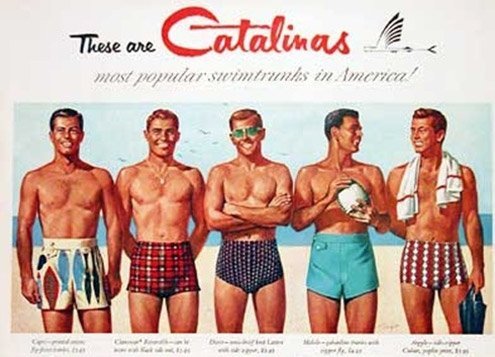 Once-upon-a-time, catalogues only, at least for boys.
I

n aSteven King horror novel later made into a hugely successful move, Carrie is in the girl’s high school shower when she begins menstruating for the first time. Her fanatic mother had never told her about the basics of puberty. Carrie is ashamed and terrified. I grew up in a religious area of Canada in which that kind of high school scenario was hardly unusual.

Menstruation is among the surest sign that a girl has reached sexual maturity, and biology is following its proper course. In recent decades, napkin and tampon manufacturers have smartly re-framed the experience. Now, menstruation can be considered an opportunity for a mother to share and support her daughter’s passage into womanhood.

Last year, I was visiting some friends one evening, both medical professionals. Their adolescent boy had an exam next day so he went to bed early. At some point he reappeared and asked for some sleeping medicine.

“Only take a few drops,” his mother warned.

“You don’t want to be drowsy in the morning,” his father added.

Off the boy went to get the medicine and return to bed.

I looked at both his parents in disbelief. Had someone forgotten to tell them that adolescent boys come with a built-in sleeping aid?

A couple of years ago in Milan, I had a contract to teach an Iraqi boy English. He only spoke Arabic, not a word of Italian. Though there was an active group of Muslims at his work place, the boy was an orthodox Christian and didn’t fit in. My husband and Alberto and I were his only friends.

One evening during dinner at our place he said, “I’m exhausted. I can’t sleep at nights.”

“Did you try wanking,” I suggested.

I rolled my eyes, “Considering the mess in Iraq, I suspect God has bigger problems on his hands.”

The next day I met him. He grinned. “I slept last night.”

“I’m sure God will forgive you,” I said laughing.

“Hey, enjoy it while you can.”

If parents are not talking to their maturing sons, who is? Very likely someone who will misinform them and fill them with guilt and shame about a natural and important part of their becoming sexually mature. Obviously, the online world has made more material available to both straight and gay boys. But I’m still surprised by the current level of ignorance, and shame.

Growing up, my friend Keven used Xaviera Hollander’s “The Happy Hooker” as his “guide” while my other friend David studied a Super 8 film called “Sex-a-Rama” he found at the bottom of his Dad’s closet. As a gay kid, finding “instructional material” was tougher, and I wasn’t alone. I was confined to the two pages of men’s underwear and bathing suits in the Sears catalogue.

At the time, I didn’t recognize his convoluted logic and thought to myself, it’s true, I do feel guilty. Who knew the Sears catalogue could be so dangerous? I vowed to stop my insidious practices before I damaged myself. Happily, my vows only lasted about six hours.

Now as an adult, though I do wear thick glasses and at times my mental sanity has been called into question, my spine is not crooked. I may spend eternity languishing in inferno, but at least I sleep at night. As a wise old drag queen I know often says, “Sex is proof that God has a really great sense of humor.”