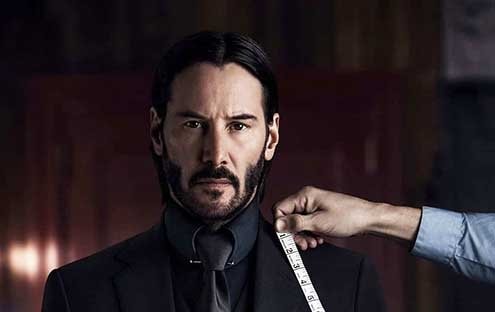 Derek Kolstad's John Wick series, now gearing up for a third go-round, set much of its second installment in Rome, with Keanu Reeves' tailor in the mix.

Wisconsin-born screenwriter Derek Kolstad is the 40-something biz-school graduate responsible for creating the characters in the immensely popular John Wick franchise, now into its second installment and counting. His is a compelling, almost rags-to-riches tale. After studying business administration at Indiana’s Taylor College, Kolstad moved to Chicago where he worked in sales. But the idea of writing movies still tugged at him. At 24, he loaded his possessions into a car and headed for Los Angeles.

Like most aspiring Hollywood writers, Kolstad spent most of his 20s and 30s working odd jobs while developing scripts and hoping for a break that for long stretches seemed improbable at best. Newly married, he was on verge of giving up on screenwriting when his wife Sonja encouraged him to give writing one last try. In 2012, he sold a script called “Acolyte.” The sale generated enough attention to keep him going. He landed some rewriting jobs and later that year sold a new script, “Scorn,” which generated a number of offers.

Kolstad says some of those offers were high enough to let him walk away from the movie business and head back to Wisconsin. But he also knew most Hollywood scripts never make it to the screen. Kolstad opted for lowest offer, from Thunder Road Pictures, above all because the Santa Monica-based company seemed intent not only on making the movie but making it fast.

In fact, “Scorn” became “John Wick,” the name of the title character (and that of Kolstad’s grandfather). It entered production in 2013 – an almost unheard-of time frame, with Keanu Reeves signing up to play Wick.

Released in 2014 and codirected by acclaimed stunt coordinators Chad Stahelski and David Leitch, the noir action movie starred Reeves, Willem Dafoe and Bridget Moynahan. It soon became a hit. “John Wick is the kind of fired-up, ferocious B-movie fun some of us can’t get enough of,” wrote Pete Travers in Rolling Stone. The movie grossed $18 million in its first month and later spawned a video game. The sequel,” John Wick: Chapter 2 (often referred to as “John Wick 2,” or just “Two”), debuted this February, with Reeves reprising his role as Wick, this time alongside Laurence Fishburne (the two hadn’t been in a movie together since “The Matrix.”)

Directed by Stahelski in his first solo effort, the sequel was also greeted with critical and box office success. Stahelski, a one-time stuntman and prominent stunt coordinator (“The Hunger Games”), ensured violent action remained at the film’s core.

Substantial parts of the sequel were set in Rome, with the Baths of Caracalla featuring prominently. Also seen are Piazza dei Zingari in Monti (in front of Residenza Leonina), the Grand Hotel Plaza, and the lobby of Hotel Mediterraneo. Several Italian actors, including Riccardo Scamarcio, Claudia Gerini and Franco Nero, made it into the cast.

Between diaper changes for his two-month-old twins, Kolstad discussed screenwriting in a time that features often-violent blockbusters.

You seem comfortable with your partnership with Chad Stahelski. How do you two work together on the story?

On the second movie Chad sent me thousands of pictures in Dropbox. And when we were in his office, the walls were covered with pictures. I’ll come up with a skeletal structure, and he’ll say, “I want this…” and I’ll say, “I want that….” It’s a little bit of a dance. It’s not the most efficient way, but it’s how we get to a story. Chad tells you what he wants, more than anyone else. He’ll say, “I don’t like that scene.” He’ll have three to five scenes he really wants. I’ll craft around it

The original “John Wick” was Stahelski’s first directing job, after a long career in stunt work. How did that choice come about?

We talked with a variety of directors and also met with a ton. With Chad and David [Leitch] it was right. Yes, it was Chad’s first directing job, but when you’ve been second unit director, you’re ready to dive into another war.

Speaking of war, why do both films contain such an extreme level of violence?

The violence is a mix of gunplay and martial arts. Is that a signature style? Calling it “gun-fu” is an inside joke: car-fu begets knife-fu begets gun-fu begets kung-fu.

The number of bullets fired seems limitless. How committed are you to some level of realism?

The film has to not only look good; it’s cool that it also makes sense. The stunt guys talk to me. In the sommelier scene [in John Wick 2, the “sommelier” is the supplier of weapons, not wine], all the stunt guys are in the room with me. They are telling me what kind of weapons work and how they work. I don’t have to go to Wikipedia. It’s gun porn. I want that scene. And the tailor in the movie really is Keanu Reeves’ tailor. We had a Chinese tailor written into the script and Keanu said, “the Chinese are good tailors, but the best tailors are Italian.” We did a screen test with his tailor, and Chad said, “Let’s go with him.”

You originally wrote John Wick with an older character in mind. Keanu Reeves, who is now 52, plays John Wick, and he seems genuinely exhausted by life, by his career as an assassin, by being beat-up. Why focus on older, seemingly worn-out characters?

I love Westerns. And the young guy always gets his ass handed to him. The old guy seems like a cynic, but he isn’t. He sees himself; he can be outside of time. He can ignore technology. The film has a lot of analog in it. [Take] the old Telex machine. The scene with the [telex] operators is a visual feast. It makes you think how vast the world is. These systems have been in place for a long time. Films I like have a heart and soul at their core – “Die Hard,” “Point Blank.” We genuinely care for the characters.

John Wick seems isolated, without a love interest. Even his dog has no name. Why?

John was the devil and then he found love. He found the perfect love and lost it. [John Wick’s wife dies of an illness in the first film.] How many of us never get to see it or have it? It’s irreplaceable. I didn’t want to replace it in the sequel. The dog is an extension of John. John understands that, begrudgingly. The dog just follows him.

The original is mostly set in New York City while the sequel is all about Rome. Why Rome?

It’s a great location site, and [Rome has] a great scene; it has tone. It’s iconic. The city you’re seeing is a character and you have to respect it. Chad is very specific as to the look and feel of the film. The version that’s impossible would be in the Vatican, but we had great location scouts to find other places. Sometimes you lose your scene the day before and you have to make it up. Rome was great for us. I wasn’t there. They didn’t need me at that point. But I’d like to know where that flight of steps is [where a crucial hand-to-hand fight scene occurs].

I think the steps could be the ones leading to San Pietro in Vincoli, which houses Michelangelo’s Moses statue; that’s in Monti near a street where another fight occurs. But do you know the hotel locations?

No, but I think it was two hotels – an outside location and an inside. When we filmed in New York City, people who know the city well said, “That wasn’t one location; that was four locations.” So I get it when people know the locations well. We wanted Il Continentale to be an Italian version of The Continental [the hotel where major U.S. underworld characters convene in both films]. And we wanted an Italian version of Winston [Julius, played by Franco Nero]; it’s a way of explaining the world.

Can you tell me the location of “John Wick: Chapter 3”? Will it be international?

You started with “John Wick.” “John Wick 2 ” is now out. We know “John Wick: Chapter 3” is in the works and possibly a TV series. Did you write your original script with sequels in mind?

“John Wick” was stand-alone, but one always dreams of sequels. When the first one came out I mentioned the idea of seven to Keanu and he said “one at a time.” But at the premier for “John Wick 2,” he said, “I can see this.” As for me, I don’t need a gun to my head; I’ll do as many as I can.