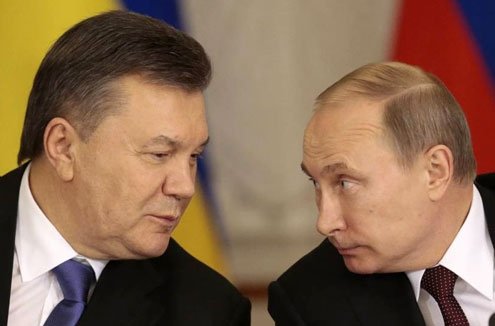 ussia’s Vladimir Putin is the last major-state autocrat, a cunning amoralist who mixes imperial flourish with Communist-era manipulation to create a tsarist mood that bypasses consensus and correctness. When his Machiavellian engine is firing on all cylinders, bullying and opportunism coexist seamlessly.

Over the last 30 days — mindful of protecting his PR prize, the Winter Olympics — Putin has defused a public revolt in Ukraine, released and essentially expelled a jailed tycoon and dissident, and pardoned punk rock protestors whose prison sentences gave human rights groups cause to badger him weekly. Three extremely complex and delicate situations, all political eyesores, were swept aside in a Moscow minute. It’s been a master class in the shrewd wielding of executive power.

The Ukrainian crisis began with a pro-Russian president trying to push his country away from European Union entry and closer to Russia’s embrace. Ukraine matters to Putin because it was once part of the Soviet agricultural heartland and has a Black Sea port that hosts what’s left of the Russian Navy. Ukraine’s seemingly inexorable march toward EU entry would estrange Moscow from its beloved a sea berth and potentially alter the grander energy game (Ukraine is almost entirely dependent on Russian natural gas.) For Putin, hindering the EU’s inroads was a matter of geopolitical vanity.

The 2012 election of President Viktor Yanukovych helped. In early December, Yanukovych backed away from signing a EU partnership agreement, driving hundreds of thousands of pro-European Ukrainians — who still imagine the EU as financial and legislative deliverance — into the streets. The massive protests appeared to signal the beginning of the end for Russian-speaking Yanukovych, the antithesis of a charismatic figure. Western media described an incipient revolt rife with police abuses, a knee-jerk viewpoint that enjoys wide emotional support.

Putin’s response was to play poker, which he does well. He knew two things: that Christmas was coming, which would dim the media spotlight; and that Ukraine cannot exist without Russian natural gas, which he’d long overpriced to gain leverage. But true leverage means knowing when to turn the crank.

As the protests waned slightly, and with them the Western focus, Putin counterpunched with a massive financial aid package and a slashing of gas prices. The move had Nixon-Goes-to-China perfection. The so-called revolt, moored in financial worries as well as civil rights, was suddenly deprived of an axel. Yanukovych regained his footing.

Putin wasn’t through. Using the acquired momentum, he pardoned and freed tycoon Mikhail Khodorkovsky, the dubiously jailed energy mogul who had long represented a symbolic thorn in Moscow’s side. The excuse was humanitarianism. As in the case of Ukraine, Western media prepared to reap the whirlwind of Khodorkovsky’s pent up rage. But once in Germany, he turned low key. He calmly proclaimed his innocence and pledged to work on behalf those still in jails. He would not go into Russian politics, he said. Moreover, he gingerly avoided hectoring his former jailor. The story was a bust.

Next came the release of two female members of Pussy Riot, a feminist punk collective that had repeatedly annoyed both the Putin regime and the Russian Orthodox Church. The two women were jailed 21 months ago after desecrating a church, with their case making sympathetic global rounds (a sympathy many Russians withheld). That both were eloquent and attractive only lubricated their Western celebrity. They each labeled their release a mockery and insisted that they would have preferred to remain in jail as symbols of the Putin opposition.

All of which grandmaster Putin knew. Once again, he said little, noting only that their release was part of larger amnesty approved by the Russian parliament (and ridiculed by the Pussy Riot duo).

By Christmas, three flash fires — the Ukrainian tantrum, the ongoing Khodorkovsky and Pussy Riot causes — had been extinguished.

Most tyrants are good cajolers and expert torturers. Few, however, are as gifted in managing the grey areas as former intelligence chief Putin, who can shift between macho man and statesman at a moment’s notice.

As a political CEO charged with ensuring the continuity of a half-mock but still half-functional democracy, Putin is peerless. Dislike the man, his methods, and his self-centeredly ironic view of democratic life, but disregard his methods at historical risk. “Entrepreneurs,” wrote Machiavelli, who saw power as management, “are simply those who understand that there is little difference between obstacle and opportunity and are able to turn both to their advantage.”