Master and Commander: The Far Side of the World 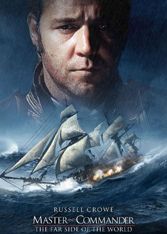 It’s easy to consider this just a guns-and-bombast epic about pretty sailing ships and the South Seas, but it’s both more probing and ambiguous. Russell Crowe is Captain Jack Aubrey (“Lucky Jack”), a fiercely proud and astute ship commander during the Nelson era and the Napoleonic Wars. His boat, the HMS Surprise, engages a French warship “Acheron” but loses her into the mist after action at close quarters. The rest of the film is Aubrey’s personal quest to track the elusive “Acheron.”

Instead of focusing entirely on masts and high seas (there’s plenty of that), director Peter Weir narrows the lens on the men. Crowe is in superlative form, but Paul Bettany (Dr. Stephen Maturin) is an excellent foil as physician and naturalist to Crowe’s warrior king. This is a beautifully-filmed, swashbuckling movie that develops the moral complexity of its characters with old-school generosity. Weir should be proud.