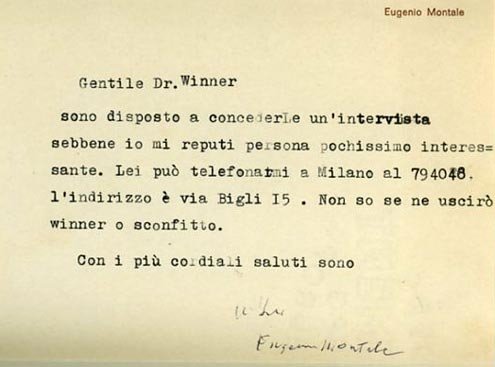 A wry response from Eugenio Montale.
I

But like many of his Italian literary contemporaries, Montale was also a journalist and critic, writing regular on a vast array of subjects, mostly for Milan’s Corriere della Sera. He published music criticism, political essays, and even traveled as a foreign correspondent.

Yet poetry remained a constant. His first volume, the 1925 Ossi de Seppia, “Cuttlefish Bones,” published at age 29, used negation to demonstrate his subtle disaffection with the bluster of Fascist triumphalism: “We can only tell you today/what we are not, what we do not want.” Unwilling to kowtow to regime norms, he found it difficult to find work in the 1920s and 30s, he continued to focus on the unforgiving natural world as means to reflect unsavory social realities around him.

After World War II, the Genoa-born Montale, a lover of both Dante and T.S. Eliot, moved to Milan, where he would live for the rest of his life. In 1975, he was awarded the Nobel Prize for literature, with the academy praising the poet’s unwillingness “to meet readers with open arms” and praising his career-long rejection of a conformist approach to the social and political status quo. “If we lose the capacity to repudiate, all is lost,” wrote the committee.

In life as in art, Montale was a difficult figure to approach. In mid-1977, after repeated calls and letters to agents and friends, a process that took several months, I finally received a punning response from him, agreeing to an interview. It revealed a side of man who was anything but dark and morose, and who, though closeted in his Milan apartment, seemed anything but a hermit – at least in spirit.

By turn cranky and jovial, he had little patience for mass media, even in its infancy. “Television is a font of corruption,” he told me. “It disseminates greed, megalomania, the desire for material possession, for fame, for position — accelerating the pace of life abnormally, dangerously. Whereas before man grew like a plant, linked to natural rhythms; mass media upset the rhythm, contorting it perhaps beyond repair.” Montale died in 1981.

I am prepared to grant you an interview, though I see myself as a person of very little interest. You can call me in Milan at 794048. The address is Via Bigli 15. I don’t know if I’ll come out ‘the winner’ or defeated.