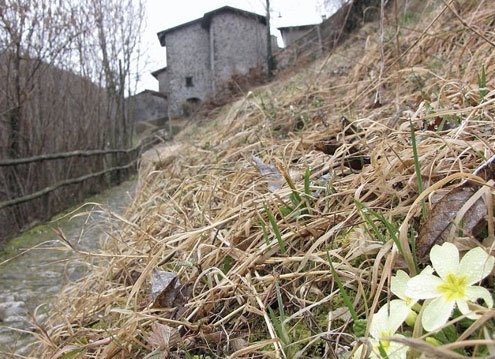 Via Mercatorum tied Bergamo to the Valle Brembana in medieval times.
O

n a splendid April day, my husband Marino and I drive the A4 highway from Milan to Bergamo and then take State Road SS470 into the Valle Brembana. We’re headed for Via Mercatorum, an ancient mercantile mule trail with a 100-meter-climb that will lead us from town of Camerata, through the hamlet of Cornello dei Tasso — among the most beautiful in Italy — and then on to the village of Oneta. It’s so pretty that we’ve decided to walk back the same way.

Valle Brembana, in Lombardy’s Bergamo Province, has a rich and eclectic past. The poet Torquato Tasso (1544-1595), the Commedia dell’arte character Harlequin, San Pellegrino mineral water, Europe’s postal services, and taxis, all have their origins in this green valley.

On our way to Camerata, we’ve passed the towns of San Pellegrino Terme and San Giovanni Bianco, finally parking along the town’s Via Papa Giovanni XXIII. From there, we’ve walked back to a sign for Cornello dei Tasso, the start of our Via Mercatorum hike.

It’s early and the fresh morning air is permeated by the sweet perfume of grass and spring flower. A group of photographers is already on the path. After 200 meters we reach the entrance to Cornello dei Tasso, a stone archway.

Time stops. Harmony reigns. Centuries of isolation have preserved the original character of the medieval stone buildings, with arched porticos lining cobblestone lanes. This was once the hamlet’s commercial heart.

We walk to a more open, residential area and the Church of SS Cornelio and Cipriano. Inside, 15th and 16th-century frescoes depict the locals of the time and their tools. A hunting horn (corno) and badger (tasso), herald of the Tasso family, decorate the crucifix. The family’s power, wealth and industry saw Cornello transformed into family territory as Cornello dei Tasso. The Holy Roman Empire later elevated the house to princely status, they were the Thurn und Taxis, known for their breweries and castle-building skills.

The family was also vital to the creation of the European postal system. Around 1430, Omedeo dei Tasso and his relatives delivered mail between Bergamo and Venice on horseback, using the Via Mercatorum to cover Switzerland and Austria. By the 16th century, the family had a postal monopoly, with courier services in Venice, Naples, Rome, Brussels, Spain, France and Germany.

Travelers could pay to ride in their coaches, a possible derivation of the word taxi. The family lineage extended throughout Europe but the Italian Tasso line died out in the 1800s.

We explore Cornello but it’s still well before postal museum hours. Marino and I decide to walk the trail to Oneta, hoping to visit the museum on our walk back.

Leaving Cornello dei Tasso, we’re back on the Via Mercatorum trail. Until a new road was built in 1592, the trail was the main link between Bergamo and the Valtellina valley bordering Switzerland. Today, it’s a popular path through woods rich in rushing streams that tumble down towards the Brembo River on the valley floor. I imagine this water flowing into the bottles of San Pellegrino mineral water that sell all over the world. San Pellegrino Terme, home of the water, is not far off.

A half-hour later we’re in the hamlet of Piazzalina, outside the small Sant’Anna church, where tadpoles swim in a shallow pool. Further on, the woods yield to open fields and we see a sign announcing the village of Oneta. In it is “La Casa di Arlecchino,” museum commemorating the famous Harlequin theater character, known as slow of mind but also nimble and acrobatic. With his colorful, diamond-shaped pattern suit, wooden sword and black mask, the Harlequin is also Bergamo’s famous Commedia dell’arte mask (masked theater flourished from the 16th-century on).

The mask itself emerges from zanni tradition, which combines farce with the diabolical spirits of rural folklore. Its theatrical version began with Bergamo-born actor Alberto Naselli (1540-1584), known on stage as Zan Ganassa.

The museum is in a 14th-century manor house, once Naselli’s home, with his character’s gestures portrayed in frescoes. I like the house’s pointy, Venetian style windows, a reminder that Bergamo was on the western edge of the Venetian Republic. A trattoria in the basement serves typical Bergamasco dishes.

From Oneta the path heads downward to San Giovanni Bianco where a bridge over the river leads to further trails. But we backtrack instead, enjoying the sun and quiet lack of cars.

Back in Cornello dei Tasso, we explore the ruins of the Tasso family home. Their first “castle” sits on a rocky cliff guarding the valley from the lower part of Cornello, protected by fortified walls.

The nearby museum, which opened in 1991, has plenty of documents about the early postal services, including an 1840 letter with the first postage stamp, the “Penny Black.” One room is dedicated to Bernardo and Torquato Tasso, father and son, both poets. Another displays 19th and 20th-century communication instruments, such as telegraphs and telephones.

On the Via Mercatorum, the Trattoria Camozza serves Bergamo fare: casonséi, ravioli filled with cheese, garlic and parsley, covered with butter and sage; polenta cunsada with taleggio cheese, smothered with cream and butter-fried sage; and chisöl, polenta filled with fresh taleggio.

If I’d been a Tasso, I would never have left.