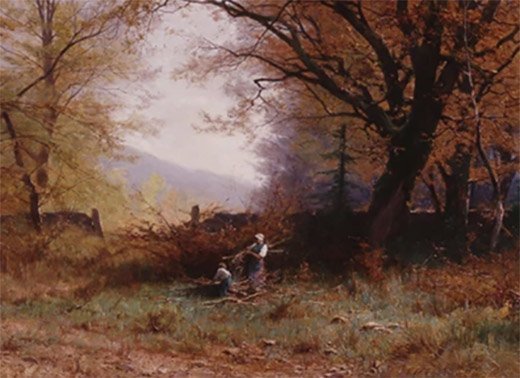 A friendship born in the Lyon countryside. Detail from a painting by Gustave Eugène Castan.
I

n the rural French village of Les Chères, about 20 minutes outside of Lyon, lives a very nice and hospitable woman named Maryse.

She resides with her college-aged daughter Marie in a large compound behind a feed and grain store off the main road, Rue de Chasselay. They occupy a two-story apartment and rent out the other units to lodgers, with a few units set aside for travelers.

I had traveled a great distance over several days after Thanksgiving, touring the Swiss Riviera and the Rhône-Alpes region that straddle the French-Swiss border. I watched parasailers soaring down the mountains into vast green meadows. I stumbled into a biker bar in a town with an exquisite chapel. I circumnavigated alpine lakes, and I spent some time just enjoying the countryside.

But I was ragged and bone tired when I arrived at Maryse’s place. She greeted me with a great smile and invited me into my apartment, apologizing profusely that the bed wasn’t made yet. Ca ne fait rien, (“it’s okay”) I replied, and helped her stuff the duvet into its cover before spreading it across the mattress.

Somehow we got into a conversation about traveling and living alone.

I had always wondered if Europeans had some secret method for stuffing a duvet back into its cover. They don’t.

She showed me where everything was in the tiny but comfortable rooms, particularly the water kettle, and coffee pot, and the bathroom. Somehow we got into a conversation about traveling and living alone. I told her I was currently on my own after a recent break-up and was quite content to be alone for a while, especially after a seemingly endless cycle of relationships, marriages, divorces, and affairs.

Oh, I have been on my own for some time, she said, and prefer it.

I couldn’t help but notice the wistful note in her voice and the sadness in her pretty hazel eyes framed by straight auburn hair. How long had she lived out here in the Lyonnaise backcountry, alone without a man, a large property to manage, and a daughter to raise?

I put my pack down in the living room and started sorting things. I was keen to get into Lyon to try out the local cuisine and walk along the riverfront, but then Maryse appeared back at my door with some fresh blankets. Before I knew it, she invited me over to meet her daughter and have some tea.

It turned out Marie was even prettier than her mother, with jet black hair. Marie’s English was slightly better than Maryse’s, though not much. She went to university in Grenoble, which she and her mother agreed was not really a very pleasant city.

Oh good, I replied. In that case, I didn’t really miss much as I drove through the city.

Not at all, Marie said. Turns out she was studying architecture and I told her about my visit to Notre Dame du Haut in Ronchamp, the one designed by Le Corbusier. Yes, she was familiar with it but was not a fan of Le Corbusier. Apparently, he flirted with Fascism, and wrote anti-Semitic articles in Nazi magazines in the period leading up to Hitler’s rise to power.

And yet, his buildings are among the most beautiful, eye-popping marvels in the world. There is something to be said for the bastard geniuses in this world, people who can create such beauty and yet be total monsters.

How long had she lived out here in the Lyonnaise backcountry, alone?

She rattled off the names of several more modern French architects that she preferred, and showed me the cardboard model she was making from her own design that was for a site in some West African city, possibly Accra, in Ghana.

Maryse made us all some tea and we chatted for two hours, somehow managing to have a very interesting and wide-ranging conversation that forced me to flex my French conversational skills to its limits. We probably would have talked on into the night except that Marie had to get to a store before it closed to buy more supplies for her project.

I realized I was famished and said I’d head into Lyon for dinner, where I had a lackluster Bouchon style dinner. For a city known as the mother of French cuisine, I was disappointed in its lack of variety. Over 100 restaurants, all serving basically the same menu, and very little in the way of nouvelle cuisine. All I can say is, avoid the tripe.

We parted ways for the night, with Maryse saying she hoped she would see me before I left in the morning. I said I hoped so too, and I meant it.

We exchanged a few emails since, wishing each other a Joyeux Noel and a Happy New Year.

In her review of me on AirBnB, she said I was Un voyageur incroyable… tres sympathetique et tres agreeable autres decouvertes — very roughly that I was one of the good guys.

And in a side note to me, Maryse wrote, Merci jeff pour ces belles discussions, kind thanks for our good conversation.

Now, the Les Chères and the rustic landscape around it is very much associated with a name: Maryse.