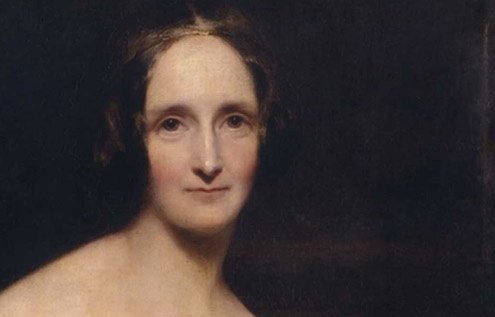 ary and Percy Bysshe Shelley fell in love during rambling walks to the grave of eminent feminist Mary Wollstonecraft, Mary’s mother, who died 10 days after Mary’s 1797 birth. It was in June 1814 in the London cemetery of St. Pancras Old Church that the beautiful and audacious young Mary, who would later write “Frankenstein,” first confessed her love for Percy, a Romantic poet and revolutionary.

Mary, née Wollstonecraft Godwin, was just 16 at the time. Percy, a friend and financial patron of Mary’s father, anarchist writer and philosopher William Godwin, was 20. He was also married with his second child on the way.

Godwin, gob-smacked at the news, demanded that his daughter give up the relationship. Mary dutifully complied until Percy, high on the popular painkiller laudanum, turned up on her doorstep with a pistol threatening to kill himself. Shortly thereafter, Percy abandoned his pregnant wife Harriet and eloped with Mary to France. Joining them was Mary’s stepsister, Claire Clairmont, who would later have a torrid affair and a daughter with Percy’s great friend, the poet Lord Byron.

The scandalous move not only alienated Mary from her beloved father, but also had consequences for Percy, whose wealthy, aristocratic family, exhausted and embarrassed by his rash, libertine ways, cut him off. The couple lived on love, writing and traveling, covering most of continent over the next few years. Intellectually, they were a perfect match, but other fissures soon appeared.

In 1815, Mary’s firstborn daughter died days after her premature birth. Visions of the dead child haunted Mary and plunged her deep into a depression that was confused and exacerbated by the early loss of her mother and Percy’s painful inability to support her in her time of grief. His health always fragile, Percy’s chief concern after the baby’s death was contracting a fever from Mary’s breast milk. Instead of consoling her, Percy, a practitioner of “free love,” distracted himself with Claire. He encouraged Mary to do the same with their friend Thomas Hogg.

Despite Percy’s insensitivity, the Shelleys married in December of 1815, just days after Harriet Shelley’s body was fished from the London Serpentine. She’d drowned herself. At the time, Mary was already reeling from fresh tragedies that included the suicide of stepsister Fanny Imlay. She was also nine months pregnant with their son William.

William was with his parents at Villa Dodiati on Lake Geneva the following year where 18-year-old Mary, inspired by Byron and Percy’s confabulations on galvanism, took up Byron’s now-famous challenge to wait out the miserable weather by writing ghost stories. This challenge yielded one of most renown and influential novels in the English language, “Frankenstein,” or “The Modern Prometheus.” By the time Mary finished the book in the summer of 1817, the Shelleys also had a baby girl, Clara Everina. After all she’d endured, it seemed Mary was finally enjoying fulfillment as a wife, mother and author.

The Shelleys were back in London living near the Thames, but they were itching to escape the stodgy English intellectual climate, the foul weather (which agitated Percy’s fragile health), and the albatross of debts he had racked up. After “Frankenstein” was anonymously published in January of 1818 (many attributed it to Percy, since it was dedicated to his mentor, William Godwin), the Shelleys, their brood, and the omnipresent Claire set out for a fresh start in Italy.

The nomadic crew went first to Venice where Claire delivered her daughter, Allegra, over to the child’s father, Byron. In August, Allegra became sick and Percy rushed hastily back with Claire to see her. He ordered Mary, left behind in Padua, to follow with their children. She protested since their own daughter Clara was also ill, but Percy insisted they come at once. Just outside of Venice, as Mary waited frantically in the doorway of an inn for Percy to fetch help, Clara died of dysentery in her arms.

Mary bitterly blamed Percy for Clara’s death, and that of son William, who succumbed to malaria in Rome less than a year later. She withdrew entirely from her husband who was soon up to his old tricks with Claire and a handful of other women who earned nods in his poetry. In the throes of despair, Mary threw herself into writing “Mathilda,” a father-daughter incest fantasy blatantly laced with hostility toward Percy and William Godwin.

In November 1819, the birth of Mary’s fourth child Percy Florence (named after the city where he was born) perked up her maternal spirits. But her marriage to Percy was disintegrating. Rumors surfaced that during a brief stay in Naples, Percy had fathered a child with their nursemaid, Elisa. The child apparently died in infancy, but Elisa’s husband was shameless hounding the Shelleys for money. The revelation mired Mary deeper in depression.

The Shelleys moved to Pisa in 1820, and on to La Spezia in 1822 where Mary miscarried her fifth pregnancy in June. She nearly died from the hemorrhaging but Percy, acting quickly, blanched her in freezing water, which slowed the bleeding. Though Percy had saved her life, she was powerless to save his.

Not a month later, on July 8, after visiting Byron and Leigh Hunt in Livorno, Percy’s schooner “Don Juan” sank at sea. Ten days later his body washed ashore on the beach in Viareggio where Byron, Hunt and Percy’s friend Edward Trelawney built a pyre and cremated the poet’s body — save for his heart that Trelawney snatched from the flames. In 1823, after five heartbreaking years in Italy, Mary and Percy Florence made the somber journey back to England.

Mary was felled by a brain tumor in 1851. On the first anniversary of her death, Percy Florence and his wife opened the box-desk that Mary had always kept close by her bed. The secret reliquary contained locks of her dead children’s hair, a notebook she and Percy shared, and Percy’s moving elegy “Adonaïs” with a page wrapped tenderly around a silk satchel containing the remains of his heart.