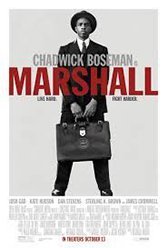 “Marshall” is a story of the young lawyer who in 1967 would become the first black person to serve on the U.S. Supreme Court, Thurgood Marshall, recounted through one relatively minor case. The facts, which unfold in 1940 in Bridgeport, Connecticut, make for high drama. A white socialite, Eleanor Strubing (Kate Hudson), accuses her black chauffeur, Joseph Spell (Sterling K. Brown), who has a history of abandoning his family and of petty crimes, of raping her while her husband is out of town, then throwing her off a bridge, bound and gagged.

Into this local hotbed strides the NAACP in the person of the brash, self-confident Marshall, played with bravura by Chadwick Boseman (“Black Panther”). This is a Marshall very different from the reserved Supreme Court justice. In this case Marshall’s side-kick — and here is where truth is stranger than fiction — is a Jewish lawyer, Sam Friedman (Josh Gad), enlisted against his better judgment into this legal fight and ordered by the court to speak for Marshall, who is in essence himself gagged.

Twists and turns of the plot add to this account of racial prejudice and survival. The City of Buffalo, New York, with its period courtrooms and Art Deco 30-story City Hall, shows off its architectural bones while standing in for Bridgeport.

“Marshall” has been called one of the most overlooked black films of 2017. That’s accurate.