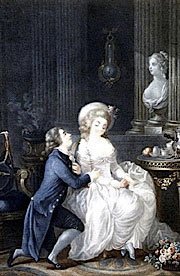 ell folks, the waiting game is finally over. After more than five years together, Fabio finally got down on one knee and proposed.

The point is we’re engaged. And I have to hand it to him: I didn’t suspect a thing. When a girl dreams about marriage she also imagines the “perfect proposal.”

To the credit of many men who recognize the importance of the dream, they’ll do anything and everything to stage the theatrical performance necessary to get a “yes.”

In my case, no lines were rehearsed. And it showed.

Despite this — maybe because of it — I cherished the real-life version far more than what I’d played out in my mind. It was spontaneous, buffo (awkward), natural, and sweet. And 100 percent in modo suo — done in Fabio style.

It happened the weekend we went to Procida, the island off the coast of Naples. With my sister visiting from Miami, we decided to spend a “beachy” weekend in three. The night before our departure, Fabio felt feverish (which I suspect now was also due to nerves) and actually considered pulling out. A few months back, we’d missed out on a Paris trip, where rumor mill friends said he’d first planned to propose. Now, Procida hung in the balance. The next day, armed with a suitcase full of antibiotics, feverish Fabio decided to join us.

When we got to the island and our lodgings, Fabio began behaving oddly, which I blamed on the fever. The proud owner insisted on showing us his beautiful gardens and the panorama of the island. I dropped my bags and followed. Fabio wouldn’t budge. The owner even offered to take them to our apartment so that we could enjoy the views. Fabio shot me a look and muttered, “Siamo a Napoli.” Little did I know he was sweating in part because my ring was in his bag. I shrugged and followed him to the room.

That day, we explored, ate good fish in the famous and romantic port (backdrop for the movie “Il Postino”) and headed to bed. The next morning, I decided to let Fabio sleep and headed for the beach with my sister. I called for a taxi and then phoned the room to see if Fabio was awake. He was.

“Come back to the apartment because I need your help with something,” he said.

The two of us walked back. Half asleep in his pj’s and with bed-head, Fabio called me to the kitchen. “Come see what I found in the cabinet.” I thought he’d found the coffee maker.

As I entered the kitchen, he pulled a medium-sized black box from the cabinet. “Che cos’è?” he asked with a devilish smile and squinty eyes (he still hadn’t washed his face).

Doubt watered down my inkling. After all, this wasn’t my first experience with a jewelry box. To date, I have two watches, a necklace, bracelet and a ring, none connected to an engagement.

Ah, but then I opened the box. There it was: my engagement ring. I turned to him in tears. “Cosa significa questo?”

Before he could even answer, I kissed him and said yes. Still, I wanted to hear the words. With a high-pitched six-year-old voice and rapidly reddening face, he answered, “That we have to start organizing!”

“Organize what?” I demanded.

In the same high-pitched voice, now even more embarrassed, “Our wedding! Because I want to marry you.”

All the while, my sister stood behind me. “Oh, no you don’t!” she said (God bless her), “You have to do this right. You get down on one knee right now and ask her!” And he did. In his pj’s with his devilish smile and high pitched voice and bed head, he got down on one knee and asked me, “Ammmorrrre, weeel you marry meee?”