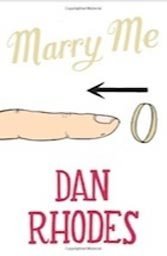 There was a time when record labels signed popular rock bands to multi-record contracts. No matter how uninspired, the band members were compelled to concoct an album at the studio’s behest. It was musical publish or perish and it led to a fair amount of dubious music.

Dan Rhodes isn’t a band but his inspiration has been AWOL for some time now. Here, as if on autopilot, he strings together a few dozen anecdotes and ditties about strange fiancés and warped marriages, many of them tinted with Rhodes’ trademark lime-acid macabre (one bride dresses up as CP3PO but short-circuits; and another pulls out a megaphone to address her ex-lovers).

Unfortunately, what oddness does exist — and Rhodes was once a genius at making oddness kindle the most peculiar of fires — is forced and repetitive. Bleakness vanquishes humor, not the case with his 2000 debut, “Anthropology,” also about love and loss and the weirdness in between.

One man tries reminding his out-the-door wife of her marriage vows. She’s stupefied. Vows? Really? “With a hollow laugh, she asked me what century I thought I was living in.” A more apt question might be why a writer of Rhodes’ sure gifts continues shovel out hollow laughs.