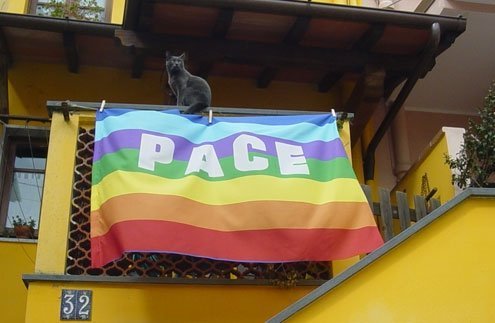 The Italian peace flag has been ubiquitous in Italy since the Iraq war.
L

ike many LGBT people, I always keep an eye out for a rainbow sticker on a door or window when I’m traveling. Since the late 1980s, the emblem has been a discrete way of signaling that LGBT people are welcome and safe inside a given hotel, restaurant or bar.

When I first came to Italy a decade ago only a handful of countries — headed by the Netherlands, Denmark, Norway and Sweden — offered any kind of legal recognition for LGBT people. And while Canada appeared to be moving forward in making gay rights part of fundamental human rights, Italy seemed stuck.

So you can imagine how thrilled I was when I got to Milan and saw rainbow flags hanging from so many balconies. It was as if, regardless of Vatican teachings, Italians were showing their support and solidarity.

My husband Alberto burst my bubble by explaining the rainbow flags had no connection to the international LGBT Pride Flag. Instead, they were the Italian peace (pace) flags, which also used a rainbow motif and were popular among both leftists and Catholic pacifists to express opposition to U.S. military involvement in Iraq as part of the Pace da tutti i balcony (“Peace From Every Balcony”) campaign.

The similarity outraged me. I had always thought the country’s left wing was sympathetic to the gay movement. How could they just take our symbol?

The original Gay Pride Flag flew in the San Francisco Gay Freedom Day Parade on June 25, 1978. Some say the flag’s designer, Gilbert Baker, was inspired by Judy Garland’s singing “Over the Rainbow” and by the Stonewall riots, a gay rights uprising in New York City that coincidentally broke out a few days after her June 1969 death. Others say Baker got the idea from the 1960s Hippie movement whose peace activists often carried a Flag of the Races with five horizontal stripes: red, black, brown, yellow, and white, representing the different ethnicities.

Early on, the Pride Flag consisted of eight stripes: pink for sexuality; red for life; orange for healing; yellow for sunlight; green for nature; turquoise for magic and art; blue for serenity and harmony, and violet for spirit. Pink was soon dropped because the color wasn’t commercially available. In 1979, when the flag was hung vertically from the lampposts of San Francisco’s Market Street, the posts tended to obscure the central turquoise stripe. Turquoise was subsequently dropped and the flag acquired its present six-stripe look: red, orange, yellow, green, blue, and violet.

In the U.S., the rainbow flag came to nationwide attention in 1989 when West Hollywood resident John Stout sued his landlords after they demanded he take the flag down from his apartment balcony. He won an out-of-court settlement and put it back up. Since then, the flag has come to be recognized as a worldwide symbol for LGBT pride.

The present-day Italian peace flag, or bandiera arcobaleno (rainbow flag), originated in the early 1990s, and has been modified over the years. Its Iraq War version has seven horizontal stripes: purple, blue, cyan, green, yellow, orange and red, with the word PACE in bold white or black capital letters in the center.

Supporters of the Pace da tutti i balcony campaign say philosopher and activist Aldo Capitini, a leader of the Italian non-violent movement, first used a rainbow flag during 1961 anti-nuclear protests. The group points out that its version has seven stripes to the LGBT flag’s six, and the order of the colors is reversed (the LGBT version also has no text). They add that the bandiera arcobaleno is inspired by the biblical story of the flood, in which God sent a rainbow as a symbol of peace between the Earth and Heaven. For some traditionalist Catholics, however, the flag is too strikingly similar to the LGBT form and they balk at using it.

Obviously the colors of the rainbow belong to no one. Rainbow arrangements are used in all sorts of global contexts. But I’m still dumbfounded at the insensitivity of the “Peace From Every Balcony” movement, since their choice of flags has caused considerable collateral damage to Italy’s LGBT community. The Pride Flag was already in widespread global circulation when the Italian movement introduced its own version two decades ago. Group leaders surely must have known this. The estimated 500,000 Pace flags still on display in Italy have all but overshadow the internationally recognized LGBT rainbow symbol, robbing it of its real meaning — to unite and give pride to the world’s most ubiquitously hated and persecuted minorities.

We can expect to see many more pace flags during the forthcoming 2015 Expo Milan. But if you’re an LGBT person visiting Italy, make no mistake: these flags are not a symbol of solidarity, welcome, or security.