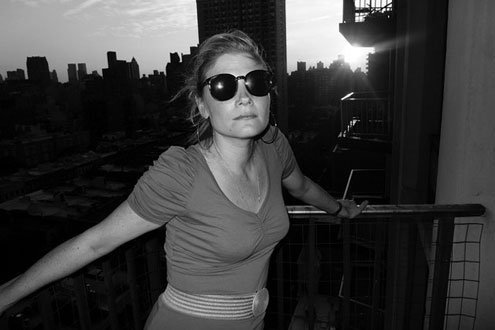 all continues to deliver as we careen headlong toward year’s end. Careening is probably the best way to describe the experience of a Marnie Stern record, and her latest self-titled effort is as galvanizing as she’s ever been.

The 34-year-old New York City guitarist is best known as a throwback shredder who manically plays the guitar in a fashion usually reserved for lonely teenage boys in their basements keen on inhuman practicing regiments and Dream Theater songbooks. Marnie Stern (Kill Rock Stars) as an album maintains these insane levels of accuracy, on par with her previous two releases. It also helps that the other members recording alongside her, notably Hella drummer Zach Hill, are all at least as technically adept as she is.

What’s wonderful about this record, however, is that there are actually hooks and, most importantly, Stern’s voice is the driving force behind them. The guitar lines are there, but on a song like first single “Transparency is the New Mystery,” the two things that stand out most are the less cluttered guitar line she’s playing and the chorus.

The lyrics are openly honest and often hurting, but the music is buoyant. It’s a testament to her ability that she makes something like anthemic opener “For Ash” so attractive to replay even when it’s about an ex-boyfriend who committed suicide. The emotion is there, but her music rises above the adversity. It’s as impressive as she’s ever been.

You could say the same about The Black Twig Pickers, a Galax, Virginia-based bluegrass group who have recently released their latest album Ironto Special (Thrill Jockey), but that wouldn’t be fair. Though the group has risen to prominence in the last year and a half largely thanks to an association with Jack Rose, a John Fahey admirer who passed away early this year, the trio has made a name for itself on a local level by hosting a monthly dance night at a general store outside Roanoke.

The dedication these guys have to their sound is evident. From their lifestyle and dedication to the community to their music, posturing is mercifully absent. Furthermore, the group pulls no punches in delivering one direct hit after another. Unlike their collaboration with Rose, or most any other folk album this year, there is hardly any “down” time on Ironto Special.

Every song is a toe-tapping barnburner, every hoot and holler an outburst of unabashed enthusiasm. Songs rarely exceed three minutes and the pace never lets up. A monthly dance night at a general store is good sense; an album of this caliber is good cents. Do not miss it.

Another excellent record out recently is by Antibalas Afrobeat Orchestra guitarist Marcos Garcia, better known now by his recording name Chico Mann. Aside from guitar, the New Jersey resident is a talented multi-instrumentalist, especially when it comes to keyboards. After days spent playing around with vintage synthesizers at home, the Chico Mann moniker and a boatload of Afro-Cuban jams were born.

Analog Drift (Wax Poetics) is the product of these experiments. If you miss the early 80s electro glory of guys like Egyptian Lover or Cybotron, or even Herbie Hancock, then this is going to be right up your alley. It’s workout montage music at times (“All That is Rising” in particular), but I mean that as a compliment — if such a thing is possible.

Garcia adds his own Latin touch with the melodies, sung both in English and in Spanish. It’s a lovely trick that recalls Soundway compilations as much as Newcleus.

Similarly, songs are kept short instead of the extended workouts expected both of early 80s electro and afrobeat. In the glut of great releases out at this time of year, Analog Drift (and the magazine-cum-label it’s being released on, Wax Poetics) is an album you’ll enjoy long after the careening is over with.