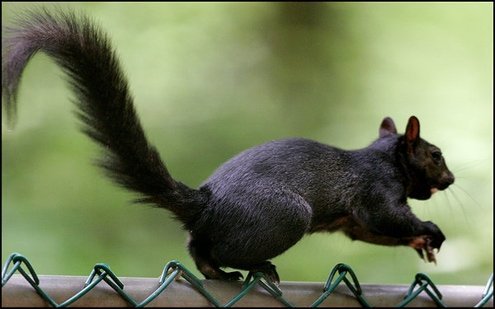 very Christmas we cooked a squirrel. Everything but the tail, that is. Petie said the tail was “marmy,” which he connected to cabbage and cauliflower and which also sounded perilously close to the most unmentionable vegetable of all… string beans. Tail-eating was definitely off-limits.

The first trick to cooking a Christmas squirrel was finding one compliant enough to permit its own capture. Squirrels were famously reluctant to die. This was unlike geese, Petie told me, citing a “mid-evil” legend in which the geese were always cooked, or “gandered.” Geese were also more “malleable,” a word he’d gleaned from a book but which came out as “mapleable,” making me wonder what syrup and fur had in common.

At 11, boyhood atoms have yet to settle. Stars still stir in the fireplace; embers are gifts in disguise; parents do not follow pioneering boys on ambitious squirrel hunts; girls are profoundly irrelevant.

But some girls resisted this relegation. “Leave the squirrels alone,” Rebecca told Petie. Rebecca was 17 and had a secret boyfriend named Ike, after the last president. We pitied Ike. We pitied the president. We ignored Rebecca, who had breasts.

Petie’s original squirrel plan was dubbed the “talk” plan. “Talk and take,” he said. He then pointed and sprinted off. Unaware of what he had in mind, I dutifully followed. As it turned out, the “talk and take” plan required sitting near the brown fence where the squirrels ran their “missions” — Petie was very military — and try to befriend one as it hopped past. “Sykological attack,” said Petie. I was charged with the befriending while Petie would sneak up from behind and capture it.

I asked Petie how to befriend a squirrel but he refused to reveal his methods. “It’s sort of… like what you do with a cat,” he told me. So, when the next squirrel hopped from the nearby evergreen onto the fence I began my invocation: “Here, kitty, kitty, kitty…” I murmured at the squirrel, which paused, looked at me annoyed, weaved its tiny fingers and then dashed off, no doubt to tell others about my poor command of squirrelese.

Next, we turned to string. Petie unloosed strings from my mother’s fat wax ball (we found it in the basement) and created what he announced was an S-Trap, or “strap.” Essentially, you pulled on the string and (if it didn’t snarl) a noose was formed. Mostly, though, it didn’t work. I told Petie this.

We placed the miniature noose at the base of the evergreen so that when the next squirrel descended from whatever it did in the tree (I often wondered what squirrels thought about while nibbling), it would step into the amazingly smart trap we’d built.

I liked the plan for no other reason than not having to repeat “kitty, kitty, kitty” to a creature that wasn’t.

We set up “base camp” under “Tall Joe,” which is what Petie inexplicably called the evergreen, and waited. Playing with sticks, we watched Rebecca and Ike in the alley, each with their big red bikes. He extended his hand; she pulled hers back. Ike was making a big mistake, I thought. Why tender a body part to a girl? Why insist? But Ike tried again and this time Rebecca held it for a second before letting it drop and walking away. It was a terrible thing being president. Petie, who had a way with words, called Ike “dumb.” A few minutes later, dumb Ike sulked away.

The first black squirrel made its way down the trunk, pawing at the bark, nibbling, scratching, and poking its snout at the trunk, inches from our amazing trap. I was close enough for “talk and take” but still could think of nothing better than “kitty” so I lay still.

The black squirrel, seeing the white string against the dark cones, probed forward. It then looked at Petie, a little-boy hulk of flesh with droopy pants and glasses. Inches from the string, the squirrel pirouetted and grazed the loop with its marmy tail (which we couldn’t have eaten anyway). It hopped away, apparently delighted at the tease.

“So close!” I exclaimed.

“Shut up,” said Petie, who had descended into full-fledged melancholy.

Squirrels, Petie told me after, as we sat on the stoop, dreaming of cooking squirrels, were like girls. “Tease and run,” he said. Ike had told him. This all sounded suspiciously like “talk and take” but I said nothing, suspecting Petie’s usual response.

Every Christmas we cooked a squirrel. True, we never duped one into certifying our exploits, but in the end that was no more important than fathoming the language of cats. It was all in our minds, much like the intentions of girls, and we never stopped making it up.