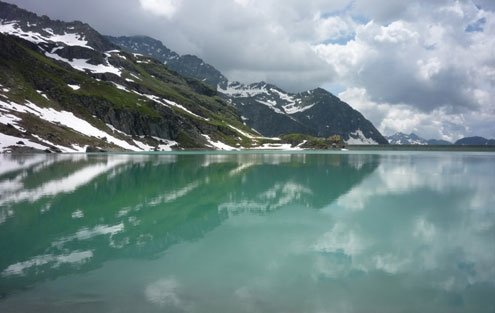 ntering the Val Gressoney in Val d’Aosta, I’m almost fooled by the trilingual signs and wood-slatted alpine chalets into thinking I’m already in Switzerland. Stadel, traditional larch-wood houses, dot the hills. They sit on short mushroom-shaped columns with stone caps that protected supplies on upper floors from rats and damp. The upper valley is Walser territory.

The Walser, whose name derives from Walliser and the Swiss canton of Vallese, are descendents of Alemanni tribes originally from Germany. Hostile to Romans, subjugated by Franks, they scattered throughout southwest Germany, eastern France, western Austria, Liechtenstein and northern Switzerland from the 2nd to 4th centuries AD. They settled Italian alpine valleys around Monte Rosa in Piedmont and Val d’Aosta in the 11th-13th centuries. As traders and cloth merchants, they maintained ties with their kin in Germany and Switzerland, thus maintaining their Teutonic dialect and customs. There are approximately 3,500 Italian Walsers.

Today I’m hiking from Stafal to Lake Gabiet and down to Gressoney La Trinité in Val d’Aosta, an autonomous region and mountaineering paradise in the northwest of Italy. It borders France and Switzerland. Val Gressoney, also called Val del Lys, runs parallel to the Piedmont border, and north towards magnificent Monte Rosa (4,634-meters) and the Swiss frontier. It’s the closest Valdostano valley to Milan, a 2 1/2 hour drive away.

It’s already 24° C at 7 a.m. this July morning when our hiking association’s hired bus leaves Garibaldi train station in Milan and heads towards Turin on the A4 highway. After Vercelli, we take highway A4/5 to the A5, and drive north past Ivrea to Pont-St-Martin. Here, we follow road 505 up Val Gressoney, past the towns of Gressoney St. Jean and La Trinité to Stafal.

At Stafal (1823-meters), we leave our bus and trot up the main road to the tourist center. Behind it, there’s a street to a footpath. A yellow sign for Lago Gabiet (2,375-meters) points the way. We start our two-hour, 650-meter climb. In all, we will hike for six hours.

Cowbells tinkle as we ascend a path through swaying meadows of purple, mauve, yellow and white — lupines, buttercups and Queen Anne’s lace — even the daisies and dandelions are bigger and more colorful in the alpine air.

As we climb, the flower species change but not the hues. Slowly, we enter larch woods whose bright verdant tufts of needles brush softly against our arms. A sun-baked, evergreen perfume tickles our nostrils. We look down on a small parallel dirt road and a rushing glacial stream, the source of the Lys River. Gazing up, we spot roe deer.

As we follow the trail, a cable-car lift whirrs above us. We pass under it and encounter it again and again until the path descends to the road and we cross the river. We begin to reclimb, following yellow diamond-shaped signs marked “TMR” (sometimes with a 7) into a side valley, Val Mos.

Patches of snow appear, as the trees grow sparse. We arrive at Alpe Mos, boggy meadows like tundra shrouded in long-stemmed balls of golden buttons, white alpine anemone, and pink hairy-tipped ranunculus glacialis. A marmot scampers under a rock. Monte Rosa presides over worn ski runs on barren moraine. Cable cars squeak overhead on their way to the station between two alpine huts.

The first, Alpenhutt Lys, is closed. We fill our water bottles and take photos of wood-carved, Teutonic tree spirits and old-fashioned, weathered sleds before we continue to Rifugio Gabiet. While some of our group stops here to eat, we walk to nearby Lago Gabiet. We find a spot to picnic and rest by the lake. Snowy mountain peaks reflect in the frigid water. I wonder what the temperature is in Milan — 35°C?

After lunch, the group walks the length of the lake to see the dam. We climb a steep, rocky path and then begin a 720-meter descent on trail 5, marked with a yellow circle. It follows an old mining rail with views of mossy crags. We head down to Punta Jolanda, a well-known rock and ice climbing area.

After the rifugio at Punta Jolanda, we begin a steep descent into Val Gressoney. A chair-lift clanks above our heads as we zigzag our way down. The heat of the valley floor rises. We cool off at a gushing waterfall where young tourist couples ask us to take their photos. Then we pass a stone power station before entering Gressoney La Trinité. Along with Gressoney St. Jean and Issimi, it’s one of three Walser towns in the valley.

“Scuola, schuel, ecole” is etched on the school. We pass hotels, pubs and a local crafts shop. In the central square, the old hamlet, we find Thedy’s House, an ethnographic museum. We board our bus behind the 18th century church, S.S. Trinity, under its clock and bell tower with roof capped by a bell-shaped copper bowl and cross.

Heading home, we speed down the valley road parallel to the rippling Lys. I take off my boots and slide into new, hand-embroidered felt slippers.