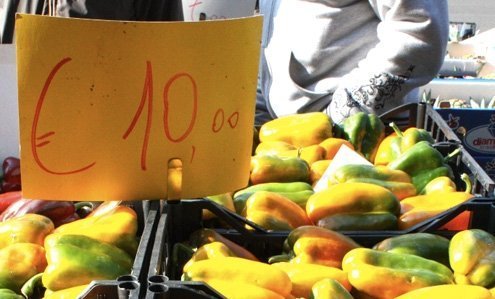 ast Saturday, some friends included me on their weekly shopping trip to Milan’s mercati generali , the city’s teeming wholesale produce market. I’d shopped for parties at the wholesale flower market, but the idea of buying produce by the crate intimidated me. Transforming a crate of asparagus or a flat of baby lettuce into a week’s meal plan was daunting even when I still had children at home. My usual market stand — where the vendor would sell me just one bunch of asparagus — seemed like a safer bet. But the outing itself seemed like a good way to see otherwise busy friends.

The market, now on outlying Via Cesare Lombroso, 53, was once located in the city’s central Largo Verziere (Vegetable Place) behind the Duomo. But like its French and British counterparts (Les Halles and Covent Gardens), it moved to a location more salubrious for the city and convenient to truckers.

During the week, it opens at 5 a.m., a time reserved for the vendors and restaurant stockers. Saturday morning, however, it’s open to anyone, from the civilized hour of 9 (a proposal to open it to the public for two hours daily to has been approved but not implemented).

The market is divided into four areas and that produce, chicken/rabbit products, fish and flowers and meat. Handling a million metric tons of fruit and vegetables a year makes this the biggest market in Italy. Fishermen in quaint ports will tell you that buying in Milan may not be picturesque, but it is a smart move: it’s where they send their best catch.

My friends and I had intended to arrive when it opened, but by the time we had had breakfast at our favorite neighborhood pasticceria, Sissi (Piazza Risorgimento, 6) and collected our group, a line of cars was already snaking into the market’s parking lot.

After unload the carts and bags necessary for large-scale shopping, we joined the stream of people flowing towards the market’s cavernous capannoni. These hangar-sized sheds look innocent enough, but the combination of international transport and cash transactions has made the market’s yawning halls a magnet for the illicit. There’s drug trafficking and money laundering. Immigrant rings have been known to work the area. Police stings over the years haven’t changed the perception that the ‘ndrangheta, Calabria’s crime organization, is deeply involved with the goings-on.

Shopping carts are dangerous in the hands engrossed bargain hunter. Aggressive hagglers can also hold you up. Waving shopping lists and trailing children and grandmothers, the crowds form currents in the shade of the halls. Idle chatter turns serious when food reconnaissance is in full swing. Our group’s mix of German, English and Italian was swallowed up by a Babel of languages as varied as our fellow shoppers. Asians sported knock-off Amani gear. Figures in burqas glided. Exuberant African turbans towered over us all. Our “elegant housewife” shopping carts (along with paper shoppers from Milan boutiques) gave us away as food-loving amateur chefs. The real professionals, restaurant owners, brought their own crates and four-wheeled carts designed for pallets. And everywhere were square, checked carrier bags that stand in for sets of matched luggage in the Third World.

The stands represent several commercial philosophies. There are those that sell only a single item — all cherries, maybe on the verge of decay — as if the proprietors were staking everything on one big deal. Other stands specialize in categories. There’s a family that sells only salad greens from their (rare) market garden on Milan’s outskirts. Arugula and lettuce were familiar, but not the rebellious vines I was informed were curly zucchini stems.

“Do they taste like zucchini?” we asked the owner.

“Boh” was the answer, with a Milan accent and a grimace. “I never tried them. We only grow them for Sicilians.”

Our group was filled with chance-takers. The jam-makers were primed for deals on less-than-perfect cherries and apricots. Others sough basil to stockpile pesto over the winter.

If you’re not careful, feeding frenzy takes over. I said yes to a crate of bok choy, which I’m not even sure how to cook. I finally went home with mozzarella braids the size of my dachshund (luckily I had an upcoming pot-luck dinner). An entire crate of avocados (€3) seduced me into dreams of finally getting enough guacamole.

Our carts filled, we lugged them back to our shady parking spot. There, we emptied our crates, spread the haul on the ground and divided it up by family group.

My friends loved the mozzarella, I’m drowning in bok choy, have three bunches of asparagus likely to go to waste, and a bunch of avocados that turned out to be stringy and black inside. Do I recommend you take a peak? Yes.