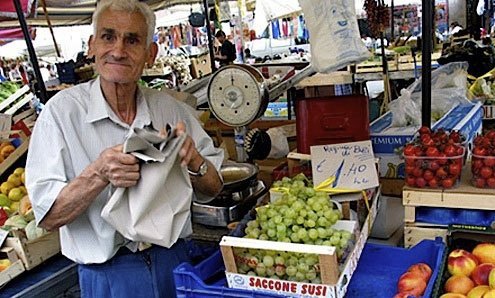 rought up in a fast- and processed-food culture, I didn’t learn about the simple joys and pleasures of cooking by hand for many years, not until my college days in Minneapolis were nearing their end and a friend talented in the culinary crafts began giving me lessons and books on the art of cooking from scratch. Now, as I live in a land where fresh local food is plentiful and much more than merely an appetite-quencher, I feel as if on a quest — sort of like a gastronomical pilgrimage — to learn the secrets of the Italian kitchen and where good food comes from.

That’s one of the main reasons I came to Italy: to immerse myself in its delectable yet simple cuisine and make it my own. Most Italians I’ve met, from my first landlord to my closest friends, have provided recipes and tips — some of which bordered on the admonishing, such as the time during my initial month here when I attempted combining basil and sausage. My landlord, appalled by my obviously untrained palate, threw up his arms in disgust, muttered some unmentionables under his breath and nearly banned me from the kitchen.

Fortunately, most have been much more gentle, albeit incredulous, when I follow my American-inherited instincts and use too much garlic or combine too many distinct flavors that are better left alone to suffuse a dish simply with their isolated essence.

One of my favorite dishes is the essence of simplicity: fettuccine al pomodoro e basilico. Though I’ve been told garlic is one taste too many I generally include it (one of the instincts I can’t disown). But with or without, this meal is delicious and easy to prepare. As with all dishes, the taste-quotient depends entirely on the freshness of the ingredients, starting with hand-rolled pasta and the freshest local plum or vine-ripened tomatoes available.

And it is at the outdoor and covered markets, which abound like piazzas in this food-focused culture, where you can typically obtain the very best fruit, vegetables and meats local farmers have to offer. In general, most neighborhoods in Rome have at least one within walking distance, as do most other cities in Italy.

To help me learn the ins and outs of the best markets in Rome, I consulted two Italy veterans who offer culinary tours involving a walk through a market and a fine meal in the palazzo where Audrey Hepburn’s character recovered from her alcoholic over indulgence in “Roman Holiday.”

One of them, Diane Epstein, a health counselor and freelance photographer who — with her husband and two young boys — abandoned a more hectic life in California for a slower-paced Italian one in 1995, took me on a stroll through her local market in Testaccio. Her friend, freelance chef Jenny Nichols, who moved to Rome from England five years ago, offered tips on shopping at markets.

At the farmer’s markets, Nichols said, they bring in all their fruit and vegetables every morning. “In the supermarket you don’t know where they come from,” she added. “You get much fresher stuff in the market, more quality.” And it usually costs less, she said.

A large, enclosed structure located in Piazza Testaccio, a block from Via Marmorata, this clean and well ordered market contains a lot of pretty much everything, including a stand devoted solely to tomatoes with more than a dozen different varieties. Filled with cheeses and breads and mountains of recently harvested fruit and vegetables, the market is also one of Rome’s oldest, Epstein said while we roamed the aisles.

“I’ve been very fortunate to live so close to such a good market,” she said.

Pointing out mounds of plump, violet eggplants from Sicily and large, ripe green tomatoes, Epstein guided me naturally to her favorite vendors, who greeted her warmly. She said the friendly and sociable atmosphere makes shopping more enjoyable. “They ask about your family,” she said.

As we spy soft fresh figs and bright-yellow zucchini flowers, she rattles off possible simple seasonal recipes, such as thinly sliced prosciutto and figs. She recommended buying fish on Tuesdays and Fridays, the days it’s brought to the market.

Easily the most pricey in Rome, Campo de’ Fiori’s century-old market is worth the visit if only for its rustic charm and specialty items, such as flower-painted ostrich eggs and melons shaped like swans.

Around a dozen fruit stands with well organized and attractive produce are spread neatly throughout the square surrounding the statue of 16th-century philosopher Giordano Bruno. To ferry their goods through the narrow cobblestone streets and into the square, vendors use a mixture of tiny trucks and the same rickety, hand-drawn carts their great grandparents pulled when the market first opened in 1889.

Though the vendors take great care arranging their mostly locally grown fruits and vegetables — carefully setting up rows of tomatoes and lettuce and spraying everything occasionally with water — the prices here are typically a euro or two more than elsewhere, especially when compared to those out of the center, such as Ponte Milvio.

“Campo de’ Fiori is enormously expensive because only tourists go there,” said Nichols. Epstein said they sometimes take out-of-town culinary clients to this market due to its beauty.

Located just off the historic Ponte Milvio near Piazza Mancini, this outdoor market’s best feature is its two certified-biologica growers, who sit near the far end (away from the bridge) of a long, narrow stretch of fresh fish, fruit, vegetables and meats.

One of them, Gianpietro Rossi, sells a small selection of tomatoes, potatoes, lettuce, peppers and a few other items for his family-owned Azienda Agricola Agribios, located in Monterotondo, 30 kilometers northeast of Rome. He said his farm, which has sold its produce at the market for 15 years, switched to biologica four years ago.

“It costs a little more,” said Rossi, who lives in Rome, but “the taste is unquestionably better.” And without chemicals, he added, it’s healthier and better for the land.

Asked if the biologica, or organic, label lured Italians to his market, Rossi said, “People come here because the products are really good not because they’re biologica.”

Mixed in with much of the produce available at the market are helpful cardboard signs indicating the variety, price and, best of all, the location where the fruit or vegetable was grown. Along with clothes and other merchandise available at Ponte Milvio, there’s also an excellent bar that serves up delicious panini and a tasty cappuccino.

Nichols’ favorite market is luckily for her the one closest to her Prati flat: the Piazza dell’Unità market on Cola di Rienzo, a few blocks from Piazza Risorgimento. She calls it “fantastic,” in part because of the organic stalls that set up on certain days.

“You look for people with small, little stores, because that means they usually grow their own,” she advised.

On a mid-summer visit to this market I found many stalls, overflowing with just-picked produce, that fit her description. One of them, operated “da sempre” by Roberta Lotito and her nephew, Daniele Tarelli, gets all its fresh fruits and vegetables from their azienda agricola in Prenestina, just outside Rome.

Tarelli, who is studying agronomia at a Rome technical school, said he has wanted to become a farmer since he was a child. “It’s my passion,” he said.

Asked why anyone should prefer shopping at small stores like his family’s instead of supermarkets, he responded simply, “risparmio” (to save money). His aunt added, “There’s more contact with other people … and more choice.”

In general, most neighborhood markets will meet most needs at reasonable prices. Two friends of mine, for example, both swear by their local markets, Piazza Vittorio — known for its hard-to-find items like cilantro — and San Paolo — a large covered market near the Basilica di San Paolo. They each argue their market has the greatest variety of good food at the best prices.

But in the end, every market is filled with dozens of vendors, each with his or her specialties, and it takes time to learn who makes the best of what and develop relationships.

“It’s also which stall you go to. Certain people for certain types of produce,” said Epstein. “It’s about the freshness and the taste of the food, really.”

Said Nichols: “You don’t go with a list. Sometimes you have to just see what’s there. It’s a challenge and sort of fun.”

About the Author: Bryan Keogh

Bryan A. Keogh studied journalism and philosophy at the University of Minnesota, where he wrote and edited for his college daily newspaper and founded a weekly campus publication. After graduating, the North Dakota native covered politics and national news during a seven-month internship with the Chicago Tribune's Washington bureau. During his year-long stay in Rome he helped design The American.