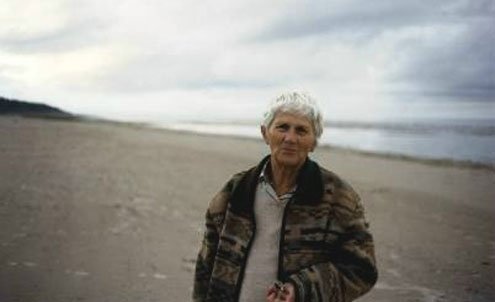 Back to the Baltic: "I don't know how to talk about it."

Italo-Latvian writer Marina Jarre was born in Riga in 1926 to a Latvian father and an Italian mother. When her parents separated in 1935, Jarre’s mother moved her two children to the Piedmont town of Torre Pellice, where they were raised by their grandparents. Jarre’s Italian family devoutly followed the Valdese Evangelical Church, a branch of reformed Protestantism that has practiced on Italian soil for nearly 500 years mostly in mountainous parts of Piedmont and Lombardy. Her Jewish father stayed behind in Riga and was killed by Nazi troops in the fall of 1941.

After World War II, Jarre earned a degree from the University of Turin and began teaching French in public and private schools. She began a fulltime writing career in the mid-1950, publishing several novels to critical acclaim. In 2004 she won the prestigious Premio Grinzane Cavour for “Ritorno in Lettonia” (“Return to Lativa”), which was translated into French, German and Hungarian but not English.

In all, she’s the author of 13 novels and short story collections, with much of her work focusing on identity and nationality. She has also probed her Italian past. Her 1990 novel “Ascanio e Margherita” portrays a love affair between Valdese woman and a Catholic man during 17th-century, when the Catholic Duke of Savoy persecuted the Valdese. Her latest novel “Neve in Val d’Angrogna” (“Snow in Val d’Angrogna”) is similarly situated.

But her Riga roots remain deep. As does her wariness of a modern world where, she insists, computers are ruining the eyesight of the global citizenry. In this interview she recalls her heritage and ruminates on the “global” planet.

Do you have any recollections of Italy at age 10, when you arrived? I can’t remember it clearly. The end of my family stunned me. My parents had separated and my mother had managed to take us away. I probably felt guilty toward my father. Our mother returned to Riga and we were left alone, my sister and I, with my grandmother, who didn’t speak French. We spoke German. So I certainly didn’t have much time to think about Italy. The Italy I knew was Torre Pellice.

Luckily I still had religion. I prayed nightly and tried to be good. The environment and the society of my grandparents attached great importance to faith, so that was definitely helpful. The Fascist customs of the time I found weird and wacky, but that’s how I feel about the entire adult world.

Your parents were of different nationalities, cultures and religion. Did this confuse you? I’ve always felt full. Maybe my diversity helps me feel secure or gives me a sense of personal strength. The real difficulty was the first adjustment to Italian society, which is distant from way of thinking and being. That dilemma endures.

What do you remember about prewar Riga? The luminous parts, since winters lasted more than six months… so much was in the dark. I remember the candles on the Christmas trees. And the ones between the double-glazed windows of all the houses Independence Day in mid-November. I remember the gleam of the orange shards of amber that my sister and I pulled from the algae we’d find while walking on the beach at sunset.

How did you feel among Latvians? I felt Latvian, though I wasn’t a nationalist like my sister. I knew my mother was Italian – we’d go to Italy every second summer. My father was a Jew, among other things. Being Jewish should have been a problem, but my father was proud of it in a gloomy sort of way, as if he wore some uncomfortable brand name.

How did the Jewish community live before the war? All in all, well. My paternal grandparents and my uncles had nice houses in the most elegant parts of Riga. We lived in a modern complex on the banks of the Daugava River. For us, the river’s name was in German, the Düna. The ghetto didn’t exist when my father was born in 1886, though I don’t think Jews were allowed to work for the state. They were professionals, doctors, dentists, industrialists, and businessmen, basically a wealthy bourgeoisie. And Riga was a major European city.

Nazi persecution of Jews in Latvia and the Baltic States is not among your themes. Why? In Italy, the knowledge of the European Holocaust was limited to what happened in Nazi death camps. In truth, Jews died in massacres in the Baltic States and in the Soviet Union well before they did in Nazi camps. Excuse what may seem like a harsh observation, but the “fashionableness” of death camps and attention to persecution of the Jews came later through film and fiction. If you put aside sentimentality you don’t always get the happy endings you crave.

You returned to Riga after 70 years in 1999. How did it feel? I don’t know how to talk about it. Writing gives me the distance that words don’t allow. I first went pack to piece together intimate memories. My next two trips were as a tourist, and it was on those visits that I noticed the extent to which Latvians had rearranged their past, basically deciding to forget their collaboration with the Nazis. The Museum of the Occupation — occupation by the Soviet Union, that is — has a section with information about the Nazi massacres of Jews, but that’s it. The walls of the burned out Synagogue on Gogol Street have some photos and information about the few brave Latvians who tried to help the Jews. The site of the Rumbula massacre in the woods near Riga [25,000 Jews were slaughtered in two days in late 1941] is now criss-crossed by major highways and totally devoid of any sense of horror.

The Nazi idea was a pure race. Today, mixed couples are commonplace. Do you foresee a mixed-race future? Or does nationalism stand in the way? Nationalism at its must vulgar falls back on customs, traditions, and formal religious practices that lead to social and political impoverishment. Those who really love where they live, and understand their history thoroughly, in all its misery and its grandeur, should be open not closed, to people coming from elsewhere. Nationalism is a product of fear of the inevitable, namely that the future will be hybrid.

And globalization? “My country is the whole world,” or so the anarchists sang in late 1800s. That’s not such a bad thing. But as media expands I think we’re in danger of becoming too attached to our keyboards and our screens. The only people who stand to gain are lens-makers. My grandchildren all wear glasses. My husband and I didn’t need them until we turned 50. Though the globalized world has all but made books into museum pieces, I still remain attached to paper. Paper is my land and my country, my sovereign state from the second I write something down.