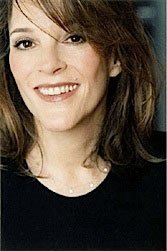 Lecturer and author Marianne Williamson, a native of Houston, Texas, has published nine books, four of which have been New York Times best-sellers. She has also been a popular guest on American television programs such as The Oprah Winfrey Show, Larry King Live and Good Morning America and is the founder of the U.S. Peace Alliance, a grass roots campaign supporting legislation currently before Congress to establish a U.S. Department of Peace. The aim is to introduce principles of non-violence into mainstream American political discourse. “We should be as sophisticated in the ways we wage peace as we are sophisticated in the ways we wage war,” she says.

Her work is deeply spiritual and transformational in nature, emphasizing the needs for tolerance, personal reflection, and prayer. She refers to God as “he” and speaks often of the Holy Spirit and to Jesus. “The world believes in finite resources and in everybody’s guilt,” she has written. “As long as we adhere to these pernicious beliefs we will not only fail to let others shine, but we will never be able to allow ourselves to shine fully either,”

Williamson, who has lectured since 1983 and spoke in Rome in July, founded Project Angel Food, a meals-on-wheels program in 1989 that serves homebound people in the Los Angeles area. Project Angel Food now serves over 1,000 people daily. Her books include “A Return to Love,” “The Healing of America,” “A Woman’s Worth,” “Enchanted Love,” and “Illuminata: A return to prayer.” Helen Bannigan chatted with her.

Why is it any more logical to think “Give Peace a Chance” works now when, in fact, it has never worked before?

I wouldn’t necessarily agree with that premise. In the United States, “Give Peace A Chance” was a rallying call to a generation that ultimately stopped the war in Vietnam. It’s a sentiment that worked for Mahatma Gandhi; it worked for Dr. Martin Luther King. It’s been trivialized as a powerless, fuzzy-brained pseudo-politics, but the facts don’t support that.

How can these goals be forwarded while maintaining church-state separation?

This has nothing to do with the protection of the government from undue influence of religious institutions. We’re talking about a spiritual sensibility here, not religious dogma. A universal compassion has to do with the consciousness of human beings, not the rules of an institution or religion.

What, specifically, brought you around to believing in these goals?

Doesn’t anyone who gets to a certain point of age or maturity hope for a better world? I think anyone who thought it possible, would do anything in their power to end war and suffering. So that’s really the question; when did I come to believe it possible? The answer would be that as my faith in the unlimited power of love met my deepened understanding of the political successes of Gandhi and King, for example. I thought to myself, “Why not”?

Was there a war, one conflict, Vietnam or Iraq, that accelerated your thinking? Or was it gradual process?

I’m definitely a child of my generation. I sat at the feet of Bobby Kennedy. I protested the war in Vietnam. I cried like a child when we started the war in Iraq.

Some cultures could be suspicious of our efforts, considering them another example of preaching “our” values to others. How do you overcome that resistance?

Why should we even seek to overcome it? It’s true. As average Americans, though, we can apologize for the behavior of our government, remind people there are millions and millions of Americans — particularly now — who don’t agree with that behavior, and maybe throw in a mercy plea based on the fact that the 2000 election was stolen to begin with.

How do you teach kids, who are inured with real violence and video violence, that rationality and interchange is a better method than brute force?

That is a huge issue. The people who mainly have to be taught are adults: to parent the children. They’re the people who make the violent video games and TV shows to begin with This is an all-systems breakdown demanding an all-systems response. We all have to work on any front possible — including our own hearts — to create more peace in the world.

You mention “holistic politics.” Nice idea. But that kind of holism seems what neither party wishes to embrace, for fear of alienating more conservative voters, or those who believe that values mean taking strong positions. Your response to that?

The greatest social justice movements in America did not emanate from a major political party. Abolition sprang from the Abolitionist Party; women’s suffrage from the Suffrage Party; social security from the Socialist Party. So the fact that neither Republicans nor Democrats get it yet, is hardly a reason to think your idea is therefore a bad one.

King was excellent with spiritually grounded politics because he had a cause and a preacher’s verve. How do you restore the “I have a dream mentality” among people who are ultimately less interested in dreams than self-sufficiency for themselves and their children.

I’m not as pessimistic as you are about the hearts of the American people. I think there is more than a critical mass of Americans who — if given the real facts and the right leadership — would and could turn this country in a different direction. I would agree that it’s the 11th hour; but it’s 11:15, not 11:45.

Are there political and cultural figures you admire in particular?

I don’t know about individuals. The world is full of wonderful people doing wonderful things, and all of them are leading the way in some respect. The issue to me isn’t who those individuals are, but rather what leadership needs to be in the world today. A leader needs to hold the space for the genius of others. A leader, to me, is someone who lays claim to the notion that humanity could do better, and in so doing calls people to their highest. We shouldn’t concentrate too much on soloists; soloists can be stopped. We need to concentrate on the song, and how each of us can in our own way be part of the choir. That’s the music that will save the world.

About the Author: Helen Bannigan