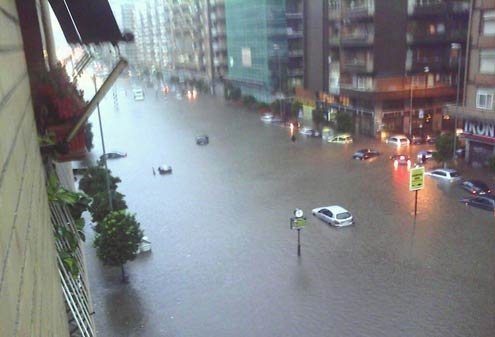 Roma Tiburtina is among the city's most low-lying areas, which means that when it rains it…
W

henever I deal with student roommate disputes I think back to my own student days in Rome when I lived in an apartment with Italians only. The new group has no idea how good they have it.

I arrived in Rome at age 23. I’d met Fabio, who is now my husband. Though I’d moved half way around the world for him, we only at the beginning stages of our relationship. When I finally moved into his apartment, we didn’t seem ready. It seemed like a very grown-up act, particularly for a young Italian man.

I initially used his apartment as a launching pad to find a place of my own. After three rent-free months, his mother gave me a little nudge (that’s putting it nicely) and off I went into one of my many Italian adventures. I found an apartment in Tiburtina, on the south side of Rome, which to my American classmates sounded like the moon.

“Where’s that?” one girl asked.

“Is that even in Rome?” asked another.

In fairness I’d never heard of the area before moving there. Ah, but the rent! Price-wise Tiburtina was perfect. I soon found out why: It was a zona populare, basically low-income housing.

While the rest of my classmates lived in Prati, in fashionable north Rome, or near the Vatican with other American students, I found myself in a completely Italian setting with no help from classmates or school.

I remember the first time I met my landlords. They were a fortunate (though I didn’t realize it at the time) twenty-something brother and sister from the Italian South. They showed me the room, gave me the price, and we shook hands. There was no contract, I moved right in.

At first it was terrifying. I’d never lived away from home, much less with roommates. Worse, my Italian skills were still shaky. When Maria didn’t wash her dishes I had no housing coordinator to complain to: I had to work it out on my own with my parlo poco italiano and basta.

Granted, I often spent the night at Fabio’s, particularly on weekends. I couldn’t live with him, his mother insisted, but I could spend the night there, even frequently (big roll of the eyes). On the other nights, I was with Ida from Latina, Silvia from Sulmona in the Abruzzo, Angela from Campobasso, and Daniela and her sister Cinzia from Sora, near Frosinone.

Each was a student except for oddball Angela, who was married. She worked in Rome during the week and went home to Campobasso weekends to be with her hubby. Angela argued the most about her share of the electricity bill. She said she rarely used washing machine, taking her clothes home for washing. Why should she pay and equal portion?

When bills came up, Ida adamantly took over. She felt one of us should go down to the meter and count the kilowatts used. When it came to gas, timed showers were recommended.

The language barrier made it hard for me to express how silly this all was, so I fell back again on trusty eye-rolls. Apartment mates changed over the months. Married Angela, who lived in the double room, found an even cheaper room somewhere across town.

Then came Maria Concetta from Puglia. She was a big-haired blonde who wore lots of makeup, rarely took showers, and loved hanging out at Termini Station to pick up men. Though she claimed she was a nursing student, I rarely saw her leave the house, at least not during the day. At night, dolled up, she’d track down some carabiniere she’d met online.

Little did we know that she’s already made a name for herself at the barracks. When she didn’t sleep there, she brought military cops to our place. It soon became a nuisance. Again, though, I was on my own with no one to complain to.

The final dispute was one Daniela and I had with Silvia, a student who also worked at McDonald’s. I remember her calling it “Mac” all of the time. When talking to her about “Mac” you’d think working at McDonald’s was the most glamorous thing she’d ever done in her life. She reeked of French fries. One weekend when I wasn’t around, Silvia and the other newbies had a big party and left whip cream everywhere. The apartment was a mess. When we confronted her, she apologized profusely and insisted she’d clean up the mess. A week later the whip cream was still there.

There was more than just Silvia. Our kitchen sink was broken and we had to wash our dishes in the bathtub (gross) while waiting for our landlord to get a plumber. I snapped. I told the landlords I was leaving. Conveniently, I’d found another solution — a tiny place of my own — so the timing was perfect. We shook hands.

But then came the matter of the €500 deposit. To get it back, they told me I’d first have to find a replacement.

Roman Holiday? Dolce Vita? Try again. This was real life and I’d just been fregata (cheated). Try telling that to warring American roommates. They don’t listen. Instead, they call the Housing Coordinator.