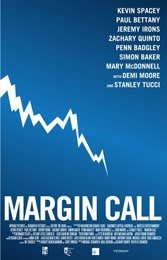 Probably one of the greatest fallacies of contemporary American journalism and cinema is the belief that making a point means ramming it home. One of the many gifts of first-time director J.C. Chandor’s fine thriller that it avoids doing just that. Filmed over 17 days in one location on a minimal budget, the film records how an investment bank unravels in a 24-hour period that begins with the callous firing of its risk management expert and the discovery and “removal” of a financial derivative “time bomb.” Taken together, the events set off the 2008 financial crisis.

The plot gives Chandor and his stunning cast plenty of opportunities to grandstand. Instead, they resist preachiness about the personal cost of working on Wall Street, the failure to understand derivatives, greedy modern youth, the ascendance of so-called “quants” (physicists and rocket scientists converted into bankers), economic inequality, sexism, moral compromise, and the bonus culture.

Those housebroken by Hollywood into expecting home run speeches are stunned when Kevin Spacey, Stanley Tucci and Demi Moore instead respond to the unfolding events with facial twitches, shrugs, or just by turning away. Rarely do quiet gestures ram a point home so effectively. Classic suspense-building tricks — there’s USB key, the proverbial smoking gun, and a sick dog — make an appearance, but neither cloys.

In addition to the magnificent Spacey, Tucci and Moore are Paul Bettany (the sole and brilliant speechmaker), Penn Badgley (a sort of Shakespearean jester disguised as a trader), and Zachery Quinto. What to say about a film whose least convincing character is played by Jeremy Irons?