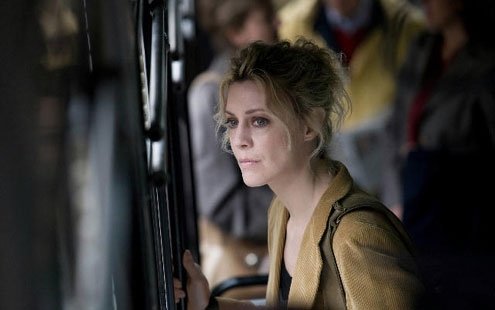 Buy: "I had a hard time getting a foothold."

Margherita Buy began her film career at age 24 with small parts in Italian television. Her breakthrough came in the early 1990s, when her effervescent energy and stressed-out, moody good looks began earning widespread acclaim. In 1991, at 29, she was nominated for a best actress “David,” the Italian equivalent of the Oscar, for two films in the same year, a rare achievement. She took home the prize for director Sergio Rubini’s “La Stazione” (“The Station”). It was the first of five best actress awards, the latest for her performance in director Silvio Soldini’s 2007 “Giorni e Nuvole” (“Days and Clouds”), about a couple in financial trouble. “In [her] un-showy way, [Buy] makes her character … entirely believable,” wrote Stephen Holden in The New York Times.

Now often cast as a mother, Buy’s early roles had more in common with Diane Keaton in Woody Allen’s “Annie Hall.” In 1994, comedian Carlo Verdone cast her as his neurotic counterpart in the romantic comedy “Maledetto il giorno che t’ho incontrato” (“Damn the Day I Met You”). The movie, about a Milan rock critic and his flaky, pill-popping lover, changed her life. Suddenly male and female leads were on equal footing. “Years ago, there were few roles for women, even in comedies,” she says “For me, things changed thanks to Verdone…. Before this, a comedian was flanked by a beautiful woman who had more of a supporting role. I owe a lot to Verdone.”

Since the mid-1990s, the Rome-born Buy has appeared in some 20 films, gradually moving from romantic lead to head of household. She was reunited with Verdone in the 2003 hit “Ma che colpa abbiamo noi” (“It’s Not Our Fault”), another Verdone take on the pros and cons of psychotherapy.

A youthful 48, Buy is now among the most recognized actresses of her generation. Wearing no makeup and dressed casually in dark jeans, a black sweater set, beat-up white running shoes, her blond hair tied loosely in a low ponytail, Buy met Katie McGovern in her Rome apartment.

When did you decide you wanted to be an actress?

After high school, I didn’t know what to do. No idea. So I applied to study at the Academy of Dramatic Arts in Rome to study theater. They didn’t accept me, so I studied at a private school and reapplied; the next year I got in. Those were three beautiful years.

Did you have any favorite movies early on?

When I was very young it was “The Way We Were” with Barbara Streisand and Robert Redford.

You’ve had a long career. What are the ups and downs of being in the movies in Italy?

Just downs [laughing]. But the fact that there aren’t very many of us and that we know each other can be nice. I started with many people who are still in movies. We have similar experiences and continue to see and talk with each other. It’s like a little community, for better or for worse … because communities that are too small can be suffocating.

How important are looks versus talent in landing roles?

Things have changed a lot. There’s a lot more attention to talent, also female talent. When I started out, I wasn’t particularly pretty. I was cute, but… I had a hard time getting a foothold. But the fact that I wasn’t beautiful or ugly actually helped. In Italy, unfortunately, they identify you right away as pretty, ugly, funny, intelligent, stupid. I’m more of a mix, a hybrid. These days I see a lot of actresses that aren’t beautiful but are very good, and their talent is recognized.

How is acting different for men and women in Italy?

In Italy, it’s hard to be part of a film that only focuses only on a woman’s situation. When there is, people say, “Why were the men treated so poorly? What do you have against men?” It’s an old bad habit, a misogynist mentality, the belief that stories are about men, and women are secondary. We’re very much behind the times.

You play the Italian mother a lot these days. Is this your choice or typecasting?

I’ve run the gamut of female roles, starting with the silly and funny, and including the strange and the neurotic. I slowly arrived at roles that were more mature, such as that of a mother. In Italy, to some extent I represent the Italian family. I prefer to think [of my roles] as the story of the same woman to whom various things happen.

You continued to work after having a child in 2001. How did you juggle the demands of a career and family? How did you cope?

A disaster [laughing]. With a lot of difficulty. But I think it’s that’s way all over the world. In the beginning, it was terrible. Really terrible. I was breast-feeding, and I got no sleep, since my daughter didn’t sleep for the first two and a half years. So I had held her in my arms every night, and then worked. Even though people helped me out, it wasn’t enough.

Did you think of quitting?

For a while. But it didn’t really seem right. I think it’s nice for a child to have a mother that works. But it’s still hard — even if my daughter is now nine. You can slow down, yes, but to stop completely seemed like a shame.

When I’m not working, my day is tied to my daughter Caterina, to her hours and her schedule. I have the mornings free to do my own stuff. A very normal life.

What does Caterina think of your profession and her father’s?

She has two very different examples. Her father is a surgeon, and I’m an actress. She’s very happy for me when people say nice things. She sees that I’m a very normal person; I’m like other mothers. Then once in a while I do acting… though she’s finding out how different my work is from the other mothers’. She’s very happy for her father, too, as he’s respected in his profession. I think that she has a positive mindset about work, which is healthy. Because work is very important.

What’s harder for you to portray, anger or love?

Would you ever do a nude love scene?

In my latest film, “Lo Spazio Bianco,” I did a nude scene and also a love scene. But it had its purpose in the film. I stood completely naked for a second. It represented that I was naked before my motherhood. It terrorized me, but I was alone. I wasn’t terrified by anyone else but by my own body. The love scene was … an artistic scene. The director was Francesca Comencini with whom I’ve worked before. I absolutely trusted her. And we found a compromise, also regarding lighting.

What makes a good director?

What goes through your head before accepting a role?

Before, I might have accepted an interesting project if the director was good. Now, pretty much everything has to make sense, otherwise I won’t do it. I like risky roles, completely different ones from the ones I’ve done. Or something fun. My criteria have changed since the beginning of my career.

What other forms of art to you enjoy and follow?

I’m not a big intellectual. I’m a normal person. I like paintings. I’m a mediocre person. But it’s nice being mediocre.

Yes. Pasta with vegetables. I make it up as I go along. I’d like to learn how to bake. I bought a book to learn.

If you could live anywhere besides Rome, where would it be and why?

In Paris. I like the city, not so much the French. I feel good when I am there. I feel very small. They have a lot of movies, theater. Maybe I wouldn’t last long there, but I like it.

You’ve also done stage work. Is there a character you’d like to play?

I’d love to do a musical. I’d love to be Mary Poppins. I don’t know how to sing, but I’d learn.

What adjustments do you try to make on stage if you feel the audience isn’t responding?

You have to try to understand the audience’s mood. It’s as if there’s only one big spectator. Sometimes this person laughs, sometimes he doesn’t. Sometimes he is distracted. It’s strange, like the forming of a common energy force. You have to try to catch him, to chase him. And you have the chance. That’s one of the beautiful things about theater.

It’s like when you have a child, it’s the same thing. You can’t pretend. They figure you out right away. You have to try to understand what’s going on while you are acting. It’s good for the mind. It panics me. It’s beautiful. Like a dive into nothingness.