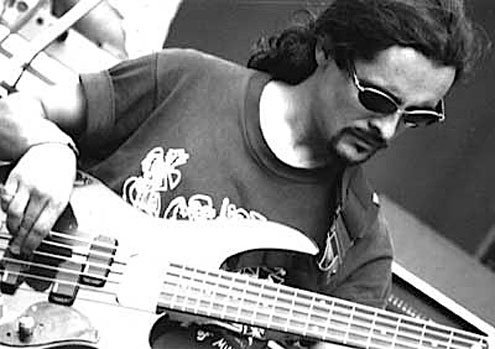 “I’ll be the one holding the bass.” I’m on my way to Rome’s Alexanderplatz jazz club for a first encounter with bassist Marco Siniscalco. It’s a January night, and tonight he’s playing with Javier Girotto’s Six Sax, a saxophone quartet with bass and drums that he’s been with since it was formed a decade ago.

Siniscalco is holding a bass — and he’s short (5’2”; 1.57 meters) with curly, salt-and-pepper hair that he wears in a low ponytail. His face looks like something from a Roman statue. His music is just as stylish. Torino-born and Rome-bred, Siniscalco, 38, has been making jazz in Italy since graduating from Boston’s Berklee College of Music in 1990. He picked up the electric bass for the first time at 14, building his chops on rock’n’roll, pop and funk. Jazz didn’t really come into the picture until the late 1980s, when he saw legends Miles Davis and Gil Evans play in Perugia.

It clicked. And kept on clicking.

“Two or three years in a row, Evans came to play at Umbria Jazz,” he recalled during a recent interview. “I’ve seen him several times since January. He played with his big band, the same one he played with at Sweet Basil [club] in New York. I saw him every night of the week in this beautiful church and it was amazing because he had this incredible band with all these incredible musicians, totally free but with this fat sound. So I started there and then I kept on buying records.”

Jazz is at least partly responsible for introducing the letter “J” into the Italian language. Beyond its alphabetic impact, however, the music has gradually slipped into the culture. “Jazz in Italy has been played for a long time because, as you know, the United States won the Second World War and then brought over her records,” Siniscalco says without irony.

Starting in the 1950s, American jazz

musicians began playing in Italy, and Italians picked up on their trends. “In those days there were traditional New Orleans-style players, the older generation. Later on, a series of more modern musicians, like the late bebop player Massimo Urbani, appeared. Very good jazz players.”

The Italian players developed along a similar trajectory to their U.S. counterparts — moving from big band through bebop to hard bop — but with notable distinctions. I imagined the differences in terms of a cutting edge art form from a young country colliding with the stolid proclivities of an antique civilization.

But Siniscalco explains it differently. Jazz has rested on the fringe of Italian society since the 1960s, developing a language closer to that of contemporary music and remaining free to experiment with what’s called contaminazione: “It’s contamination, the things that happened to the original style, which is now more mainstream — a little tango, a little klezmer, and of course, swing, but with a different color to it.”

When I tell him that the word “contamination,” in English, evokes childhood memories of cootie shots and playground dramas, he just shrugs. “European jazz is much more impressionistic and a little less rhythmic, less swinging than American jazz. Roman jazz has a big mainstream scene, in other words, bebop, and a smaller, diciamo, avant garde scene, and then a bunch of younger musicians that try to contaminate things.”

Siniscalco’s solos reflect his spirit: playful, exuberant, and serious when necessary. He takes his time building a phrase and then lets it go like a Buddhist monk and his mandala of sand.

Though Italian jazz may be on the fringes, Siniscalco doesn’t appear to be struggling. He lives in a spacious and airy apartment in north Rome with his girlfriend, her dog Gypsy, and a dozen electric basses; he paraglides in his free time. “My interest in American music was just a part of my musical work. When I returned to Italy [from Berkley], I didn’t know if I was staying for good, but I did.”

The problem with jazz in Italy, he says, has less to do with music than venues for the music — which are few. Rome is the jazz capital, with Bologna and, to a lesser extent, Milan and Genoa, showing life. Torino is just starting out. “It’s not that there aren’t jazz musicians in these places; there just aren’t many places to play.”

Unlike northern Europe, where institutional support for jazz is strong (take the North Sea Jazz Festival in The Hague, for example: 15 concert venues, over 1,200 musicians, around 70,000 audience members annually), Italy lacks the funding to promote new or lesser known artists. “There are not many people who organize concerts. Those who do have their own list of artists from the States, northern Europe, and Italy, and they tend to ask the same artists to do different projects. Even if someone is very talented, if their name isn’t known, they may not be able to fill the hall, so the producers won’t take the risk. In Italy, none of the festivals are 100 percent financially supported by the comune, so they have to worry about filling seats.”

Getting an audience can also be rough.

“The audience has been up and down. In the last 10 years the audience has gotten much closer to jazz than at any other time because various comuni have made a lot of jazz festivals possible.”

But local clubs looking for an edge in clientele began emphasizing Latin and South American music, which (following immigration patterns) has surged in popularity since the late 1990s. “There was a time when there were many jazz clubs, more than now, like at the beginning of the 1990s. But musicians played too many standards or things without a real idea inside, so people after a while lost the feeling and stopped showing up.”

But the news isn’t all bad. This year Umbria Jazz, in its 30th season, headlined Herbie Hancock, Burt Bacharach, the Count Basie Orchestra, and Pat Martino.

Siniscalco is cautiously optimistic: “Maybe they’ll all go away [the festivals], but we have at least three good places to play [in Rome]: Alexanderplatz, which becomes the Villa Celimontana jazz festival in the summertime; La Palma Jazz near Tiburtina; and the Auditorium, which has very good jazz programs. Plus the little clubs that often do jazz concerts.”

His most recent project is a collaboration with vocalist Antonella De Grossi. The duo has reinterpreted and rearranged songs from five centuries of Neopolitan folk classics on an album called Partenope. The recording is a fusion, a new contaminazione, one that offers a contemporary perspective on an age-old phenomenon: unrequited love. Now that’s amore.