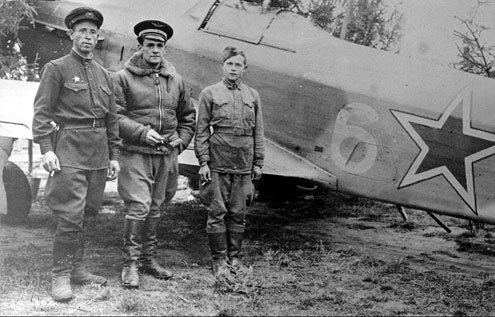 Paris-born Albert, a Renault mechanic, joined the incipient French air force in 1938, and two years later resisted the Nazi Germany invasion of France. When France collapsed and collaborated, he went with Charles de Gaulle’s Free French Liberation movement, volunteering to fly on behalf of Communist Russia, which the Nazis had betrayed and attacked in 1941.

De Gaulle, a vain nationalist who would later lead postwar France, needed angry Russia as an ally. Albert was true to the alliance of convenience, downing 24 German planes, earning the title of “Hero of the Soviet Union,” tantamount to an Iraqi sergeant receiving the Congressional Medal of Honor.

As the war’s bedfellows changed by the year, hubris and humble pie touched all involved. Since the United States never endured such home soil tumult, European survivors sought it out as a safe haven.

In the late 1940s, Albert met and married an American, left the French air force, and moved, American Dream-style, to Florida, where he opened a hotel chain. He died at 92 in a Harlingen, Texas nursing home.

His transatlantic flight focuses the fragileness of Europe’s new glue. Postwar Europe’s American escapees fled scars and bad memories, while those who stayed on took America’s rebuilding money in exchange for ideological promises.

Europe was soon split in two, with Washington and Moscow acting as enemies and enforcers. Replacing the cultural and political zigzags of the 1930s was static “for us” or “against us” reality in which Christians and atheists sparred for supremacy based on new-age colonialism.

Divine will was relocated to fit the American mood, a categorical imperiousness today’s Tea Party acolytes pine for in much the same way as wistful Russians dream of repelling Nazis.

When the political gag order broke in 1989, age-old migration streams resumed. This time it was broken Russia and its satellites that coughed up survivors. But unlike never-invaded United States, which had parried 19th century immigration into cheap labor and Promised Land propaganda, postwar Europe responded more gingerly to the influx. Fresh to cautionary tales, it worried about “breached” borders and the implicit the perils posed by “foreigners.”

Long accustomed to national purpose and the great clamor of sides, parts of the continent remain uncomfortable with disappearance with the more meaty positions of motherland. Making pay-for-view Europeans shake hands is easy in Brussels but far harder at a local level, where identity remains an adjunct of customs, and customs a tool of bias.

A few months ago, elderly air ace Albert got a medal from Russian consul general in Houston, a reminder from nationalist-milking Moscow that his transnational toil was not forgotten. “The world isn’t in trouble at all,” Albert remarked in an interview. “The world has already been stable for over 50 years.”

Seen by an aging Frenchman in Texas, it is. For veterans of world wars, stability is little more than war’s absence. The trouble is state slaughter. Anything else is a picnic.

At the same time, the Europe Union remains an institutional blanket over an unmade bed. On paper at least, a Pole can work Italy and a Czech in Germany. But paper isn’t equal for all. Meanwhile, the United States maintains its costly but paternal role, covering military flanks in the event Russia reawakens.

For Albert, preserving Europe (and France) meant fighting fascism on request, which he did for anyone who asked. Identity meant action. Now it means accepting and pledging to a post-1989 West whose political geography has yet to acquire a systematic compass, let alone felt personal meaning.

Emphasis on a global world aside, the cultural narrative of the tread-upon, a category that includes most of Europe’s nations, remains contingent on the preferences and predilections of their 20th century liberator, the unscarred and trouble-free America to which Albert fled following the hodge-podge hates of war.

Though Brussels won’t admit it, many are Europe’s 2010 Alberts who, given the chance, would still look to America to start a hotel chain, still dreaming of a future within the evolving American furor.