Maps to the Stars 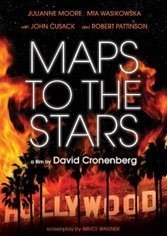 Seeing a David Cronenberg movie always comes with trepidation. The Canadian director’s ongoing investigation into whether emotional or physical violence is the most hurtful can tip easily into excess. The bare bones of “Maps to the Stars” hint at such excess early one, when scarred pyromaniac Agatha (Mia Wasikowska) returns to Los Angeles to reconnect with her estranged family. We don’t need details to suspect that the characters, including fading actress Havana Segrand, twisted child star Benjie Weiss and creepy self-help guru Stafford Weiss (Julianne Moore, Evan Bird and John Cusack), will invite pain of every kind.

Yes, there’s an insider-Hollywood dimension to all this, with Tinseltown set up for a big fall. All think they’re headed somewhere but most are stuck in nowhere. But that’s not really the focus. Cronenberg is merciless but he’s not grotesque, and this headlong dive into move-land is less about Hollywood than building life on a lie, and the fallout.

That’s not to say that the film lacks pure horror. No Cronenberg story flourished without it. But this time around, his sense of excess doesn’t feel excessive. In fact, his restraint gives the whole of the film (with strong performances across the board) a satisfying kind of European intimacy.