Map of the Human Heart 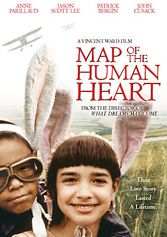 Unencumbered by skepticism, New Zealander Vincent Ward has made a romantic fable that puts ardor and hopelessness in the same sentence. In a nutshell, sickly Inuit boy Avik falls for a French girl and pursues her improbably over decades. The story opens in the modern Artic, where an old man watches a mapmaker (John Cusack) at work. The old man is Avik, who unfurls his history in flashbacks, beginning with his ties to a previous mapmaker Russell (Patrick Bergin) at the start of the 20th century. Russell ushers tuberculosis-stricken Avik to treatment in a Montreal hospital. He speaks no English. There, he meets Albertine. It’s mute, first-sight love at the delicate crossroad between childhood and adolescence.

Avik grows into the handsome Jason Scott Lee and Albertine into the stunning Annie Parillaud (“La Femme Nikita”). When World War II breaks out, Avik joins the RAF as an aerial photographer and rediscovers Albertine, now partnered with Russell, apparently closing the circle.

But no. Pent-up passion prevails. Lovers at last, Avik and Albertine entwine in Royal Albert Hall and atop a barrage balloon (cinematographer Eduardo Serra frolics with the latter). Ward pulls it off unabashedly because he owes no debt to verisimilitude. He lures you from gravity into bittersweet magical realism.