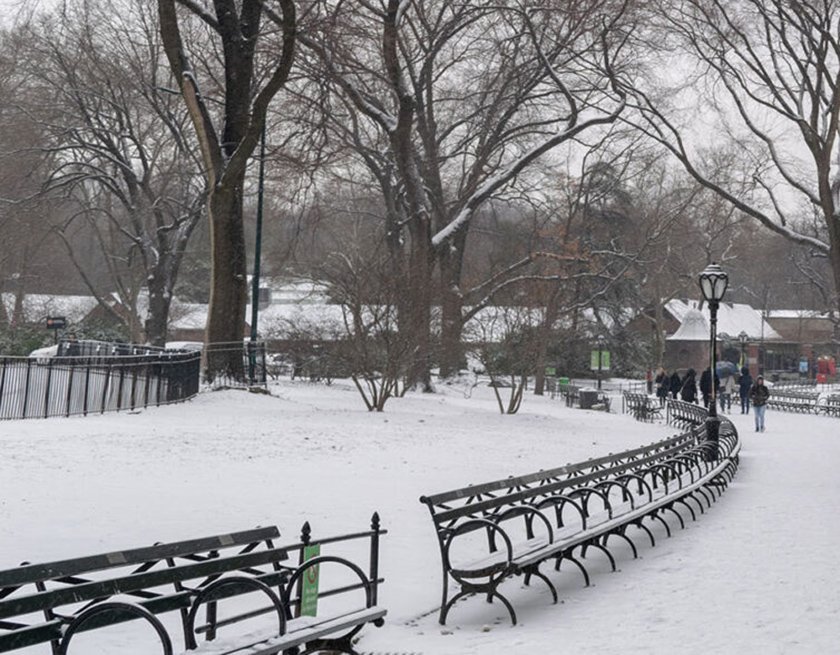 Time to head back to winter in Manhattan . . .
L

et me turn the clock back four months, to a midwinter day in January. It’s a snowy morning in New York. Actually, it’s not just snowing — it started as cold rain, then it turned into hail, then sleet, then snow. A miserable evolution. A menu for how to become cold and wet in March. That’s right; it’s March. It’s not a freak occurrence. The same weather pattern blessed us a few days ago. But the most shocking thing of all is that a few years ago, this weather would have pushed me over the brink into unreasonable anger. Today, I’m accepting of it and open-minded about how I’ll live my life in this climate. In short, I’ve changed.

One might say I’m not losing my mind over snow in March because I’ve only been back on the East Coast since January. Three years in Los Angeles and one in Rome should have emptied my stores of resentment for bad weather. True. However, I’m not merely tolerant of this weather; I am neutral to it. I accept it and ignore it. Perhaps that’s the reason I’m not banging pots around as I make myself lunch — I’m a resigned adult. But as I consider making my way outside, the mood that strikes me isn’t, “This better take five years off my time in purgatory.” I just register the weather and grab an umbrella.

Perhaps that’s the reason I’m not banging pots around as I make myself lunch — I’m a resigned adult.

Why does this matter? Because I used to despise this endless bad weather in New York, one of the many things I hated about it as a city. I also couldn’t stand having to take the subway to get places. It always seemed like such a complex hassle that took up so much time. And I truly detested the chaos of people, bikes, food trucks, and cars. Couldn’t everyone just stay home? Did they really have somewhere to be?

Not to mention how annoyed I’d get at the people who fawned over New York — “It’s such a cultured city!” “I love how vibrant and alive it is!” Or “You can breathe the art!” Really? Yeah, New York has the theatre scene, but it’s also the financial hub of the United States. I bet the ratio of artists-to-finance bros is either 1:1 or skewed toward the men in Patagonia vests, prowling the streets of midtown, salad in hand, no carbs in it, cause they’re planning a trip to the Exumas in the Bahamas in May.

But these things now slide over me like water. I don’t mind them at all. I almost enjoy them, a little smile as I ride the subway, wade through crowds, listen to people lionize this city. I’m convinced that I’ve changed — and what makes me sad is that I don’t know when I did.

As a child, I remember asking an adult if they’d always liked asparagus, and they said no, as they got older, their tastes changed. I’m a big-enough fan of fun facts that I know our taste buds evolve. Think, though, of how many changes aren’t so easily laid down solely at biology’s doorstep. Like our changing taste in clothes, getting over a fear, a writer suddenly making sense to us. Or not minding New York’s inconveniences.

Dramatic experiences alter us in easily traceable ways. If you’re in a car accident, you might become a very cautious driver — it’s obvious where your new behavior comes from. But I must have had experiences that re-wired parts of me without my knowledge, so that I can nearly enjoy these things about New York.

As a child, I remember asking an adult if they’d always liked asparagus, and they said no, as they got older, their tastes changed.

Tiny shifts took place inside me simply by living, shifts that I could never trace to their origins. Primordial links, of sorts, that have been buried and lost. I don’t know what life experience should be held accountable for my sudden imperviousness to New York’s annoyances. Even though, because of them, I’m not the same person I was a few years ago. I’m left feeling like a guest inside myself, a spectator. Like the person in the audience who knows the magician isn’t actually doing magic but can’t decipher how the illusion works.

I’m meant to accept these changes for what they are, with no explanation supplied. It’s akin to being told, “Don’t you worry your pretty little head over this, sweetheart.” I suppose I won’t. I can’t. It is odd, though. The only things to do are to enjoy the fact that I no longer mind the snow, taking the subway, or walking through crowds of people who really shouldn’t be there at all, given the weather, and to laugh to myself when I hear someone say, “There really is no other place like New York.”