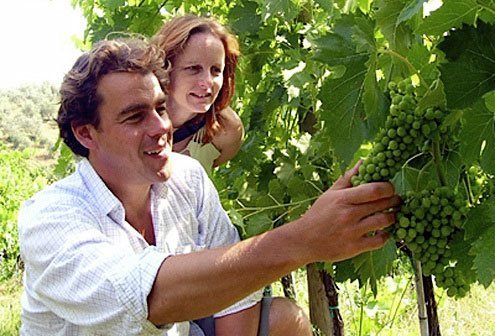 aragiste: ga-räzh-eest noun, French, from “garer,” to dock, to protect. 1. a passionate winemaker who creates fine limited production wines (occasionally in his or her garage).

Even before moving to Italy, I’d grown disenchanted with traditional mass production and snappy sales jingles. I steered away from the fast food nation of biggie fries and burgers and tried avoiding consumer trendiness. While I may have succumbed to my share of Starbucks venti soy chai lattes, I wasn’t the least bit tempted to waste my paycheck on a slim red razor cell phone or cross-trainers that cost the equivalent of the GNP of Burundi. Flipping through magazines, I even managed to steer successfully away from $200 Blinde sunglasses even if Hollywood filmmakers assured me they’d make my Washingtonian boyfriend look sexier than Neo in “The Matrix.”

In Italy, my modus operandi for picking wines tends to follow the same contrarian streak. That doesn’t mean that I don’t agree with the recommendations of industry giants such as James Suckling or Robert Parker. It just means I’ll occasionally veer off the beaten path to discuss creative wines that may lack a stampede following but are good values.

I do this because in Italy size doesn’t necessarily equal quality, or even good distribution. I want readers to experiment with wine styles and not wait for that signature stamp of expert approval. Taking risks can mean finding interesting and afforable bottles before “official” honors — and the price jump that inevitably goes with it.

In France my favorite wines are often the result of the gentle hands of Les Garagiste, maverick winemakers made famous in the late 1990s for their innovative approach to making bigger, fruitier Bordeaux in very modest quantities.

But unlike their French neighbors, most Italian small producers remain focused on tradition and shy from innovation (which means standards are uniformly high but individually-styled wines harder to find). Recently, while looking for an Etruscan archer’s tomb near Montefiridolfi in Tuscany, I met an enologo tinkering with the local grapes. He reminded me of his Bordeaux brethren.

Tim Manning, supported by the Cavellini family, has pushed Tuscany’s winemaking envelope since arriving at Il Borghetto in 2004. A British enologist trained in Italy, New Zealand, and the United States, Manning uses the French method to make Chianti Classico. It’s an unusual approach, and we chatted about it before the upcoming harvest.

Manning uses élevage in his winemaking, a quintessentially international concept that has no simple English equivalent. The French word means “to rear” or “to breed” and can be applied to both livestock and youth — as in proper rearing. In enology, it defines the winemaker’s role in fostering and guiding young wine, much as a father does a child until it is bien élevé — well brought up. In the case of Il Borghetto’s signature wine, that means applying global style to a traditional DOCG Chianti Classico, then taking it a step further by bottling the result in a Burgundian bottle.

I find the results exciting. Here are my thoughts on two of their products.

A 100 percent Sangiovese, it is matured for 24 months in a mixture of new and old barriques. The result is deep ruby with a restrained but emerging bouquet of raspberry, black currant, and plum.

Rosie 2004 IGT. Here’s 80 percent Merlot and 20 percent Cabernet Sauvignon, matured for 24 months in the same mixture of new and old barriques as the Chianti. Rosie is seductive, full-bodied, and fleshy. It’s easy to drink with a long finish and compelling perfume. A spicy texture rounds out its opulence.

Don’t miss either of these wines.