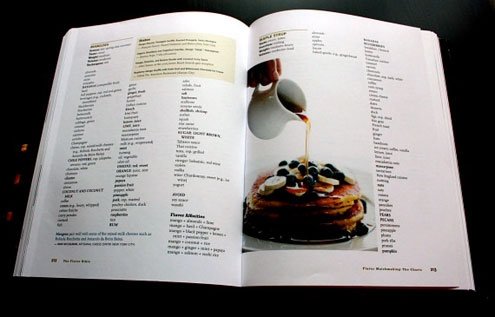 Connections that bring out the best.
I

’ve never been particularly religious. Despite three years of living a stone’s throw from the Vatican I don’t see that changing anytime soon. If anything, living this close to the pope, I’m bound in the other direction.

That said, I have found a book that speaks to me, one that connects things in a way I had never thought of before. Its message is changing my life — at least in the kitchen.

That book is “The Flavor Bible.”

The authors, Karen Page and Andrew Dornenburg, are a gastronomic literary couple who live in New York City. The book, which gets considerable input from great chefs across the globe, was published in 2009.

The first two chapters lay the groundwork for the bulk of the book and discuss flavor. They present how we perceive flavor and how great cooking maximizes it by connecting it to the mind, body, heart and spirit.

While I’ve read the opening chapters at least three or four times each, it’s chapter three, entitled “Flavor Matchmaking: The Charts,” that’s the meat of the book. It is essentially 350 pages of lists.

They range from specific ingredients (white sesame seeds) to kinds of cooking (Asian cuisine) to broader, more suggestive categories (Autumn). Under each list is its key aspect and recommended cooking techniques. These are followed by ingredient pairings. Here’s an example based on the entry for pancetta, Italian bacon:

Using this list you could come up with a wide array of pancetta-based dishes. A safe choice would be following the boldface suggestion, pasta and sauce, which would get you amatriciana. Or you could choose meats: maybe pancetta-wrapped beef medallions. If you wanted to be more adventurous, the suggestions might yield blackened chicken breasts sprinkled with crispy pancetta bits and coarsely chopped pistachios.

Since I got this book at Christmas, I’ve been playing with recipes and ingredients. To date, the best creation was a Northern Italian-inspired stuffed pasta dish. Crema di noci, a walnut cream sauce, is relatively common in the winter, but a friend had heard of a slight variation, crema di nocciole, a hazelnut cream sauce. We were both intrigued.

To the bible we went.

Under hazelnuts we found chocolate and vanilla as the most highly recommended, they were followed by cheese (ricotta), coffee, cream, figs, honey, orange (juice, zest), pumpkin and sugar (along with about forty other ideas). I’d just eaten dried Calabrian figs that my roommate brought from home, so they jumped off the page.

We settled on figs and hazelnuts as a base. What do with them? Fresh figs are not in season so we’d have to use the dried kind, not problem since I like the enhanced sweetness they bring to the table.

Combining figs in the crema di nocciole would be difficult, but what about separating the two? This led us to ravioli. The buttery flavor of the hazelnuts would be a nice savory contrast to the little burst of sweetness in the fig filling.

Back to the bible, this time under dried figs. We found honey, orange; walnuts and red wine were the best pairings, with cheese (ricotta, Parmesan) cinnamon, honey, pistachios and raisins also highly recommended. We decided to play with wine, ricotta and a dash of orange.

The recipe below is what we came up with.

For the fazzoletti filling