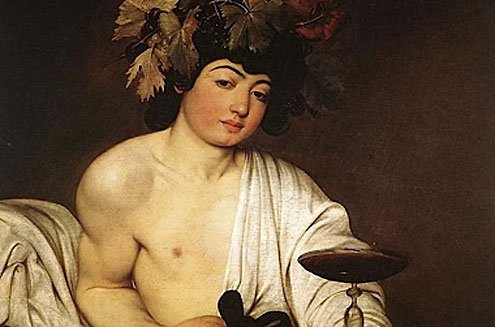 According to legend, the god Bacco (Dionysus) travelled the windy seas carrying with him a strange vine-like plant...
A

sk any Sicilian about the island’s significance in the world of wine and many will tell you that man’s firsts curious sips were taken there.

According to legend, the god Bacco (Dionysus) travelled the windy seas carrying with him a strange vine-like plant, which he tenderly planted in the fertile hills near Naso in northeast Sicily. Taking root, the vine spread across the valley producing fruit that kept both gods and mankind smiling for centuries.

For those of you unswayed by romantic Greco-Sicilian legends, Sicily’s claim as a principle birthplace of Mediterranean wine is now backed by fact. Phoenician wine relics found near Siracusa and Ragusa suggest that grapes long considered indigenous were actually introduced by the Greeks and other regional travelers.

The island’s winemaking prominence continued well into Roman times. Julius Caesar himself is said to have procured cargo-loads of Sicilian wine, his preference being Grillo, a Sicilian variety used to make Mamertino. And what better microclimate to grow grapes?

The island has near-perfect sunny growing conditions and is home to more cultivated vines (160,000 hectares) than any other region in Italy. It produces more wine annually than Australia, New Zealand, and Hungary combined.

So where have all those gathered grapes been going? And why is it that with the exception of Marsala, there are only a handful of well known Sicilian wines that have garnered international attention? With so many microclimates and soils across the island’s vast growing areas, why isn’t Sicily more well known for its wine’s diversity and terroir?

The answer is complicated.

Unlike Tuscany and other mainland regions of Italy, Sicily’s wine production has been dominated by grape-growing cooperatives called cantine sociali. Over the years these major coops became bulk suppliers for the local Marsala market. They also exported blending wine off the island for use in Tuscany, Piemonte, and France (where it’s called coupage). Today, 80 percent of island growers still use the cooperative model, pooling grapes from smaller private growers into colossal cantine, bottling some, but shipping out more.

It wasn’t until this decade that small producers and inventive estates began to break away from the Quantity vs. Quality mentality and start considering the possibility that their own grapes and unique terrain might be worthy enough to produce high-quality wines bottled under their own names.

The results have been exciting.

The Western coastal regions of Sicily are arid and its sandy soil produces wines that are markedly different from the ones cultivated in cooler climates around mineral rich Etna. Even when made with the same grape varietals, these not-so-subtle differences in microclimate produce dramatically different tasting wines that speak loudly of the lands where the grapes are grown.

Today, even bigger mainland producers are becoming enthusiastic and investing in what all of them hope will be Sicily’s wine renaissance. Attracted by reasonable property values and attractive vineyard prices and lured by the opportunity to experiment with rarer southern varietals, winemakers such as Veneto’s Zonin, GIV (Gruppo Italiano Vini), and Mezzacorona from Trentino, are starting to see their investments pay important dividends. If the influx of cash brings more experimentation, I’m sure that “Super Sicilians” are not far off.

Here are three Sicilian success stories to sample from.

Palari, 2001 Faro: Produced from a blend of Nerello Mascalese, Nocera and Nerello Cappuccino grown on hills overlooking the Straits of Messina, this wine has bright berry fruit and chocolate fragrances with an earthy mouth feel. Delicious and well balanced with lots of spice.

Feudo Arancio, 2004 Grillo: This is an inexpensive IGT wine produced by Mezzacorona’s youthful star winemaker Calogero Statella from native Grillo grapes. The aromatic white is a refreshing alternative to Chardonnay and perfect with Sicilian seafood dishes.