Manchester by the Sea 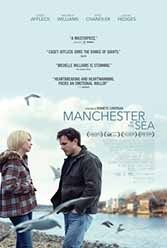 It’s wise to be wary of films that feature grief and death, if only because they’re often burdened by teachers, priests, psychologists and best friends that often intercede to provide the cloying and self-righteous counseling that will eventually restore the victim to mental health. “Manchester by the Sea” (the name of a Massachusetts maritime county) is an exception, though there’s more than enough grief and death to go around. The film begins with the premature death of Joe Chandler (Kyle Chandler), who leaves behind his 16-year-old son, Patrick (Lucas Hedges) and a brother, Lee (Casey Affleck).

Traumatized Lee is surprised to learn that he has been named Patrick’s guardian. His grief is deepened and complicated by a horrific family tragedy, revealed through one of several flashbacks that complicate the film’s first half.

In essence, the story is about how Lee and Patrick react to their circumstances and their new relationship. Newly appointed guardian Lee retreats into a quiet yet deeply troubled, low-affect pragmatism, consistent with his problem-solving habits as a handyman, yet distinct from what little we know of his damaged past. Patrick is instead protective but active: he plays hockey, he’s a guitarist in an earnest rock band, and is at home with his teenage sexuality. Both men, however, find an outlet in physical violence.

Manchester, Massachusetts’s winter weather is also a factor. The gray skies are relentless, and, more important, frozen ground deprives Patrick of the burial ritual he needs.

Whatever healing Lee and Patrick can get is further strained by their differences in temperament and age. A subtle, sometimes ambiguous, and often terse script avoids the kind of maudlin TV dialogue that often damages such films. When Lee’s ex-wife Randi (Michelle Williams) pleads dramatically for forgiveness, Lee can only reply, “there’s nothing there,” apparently referring to his inability to remain in Manchester.

The film is far from flawless. But for the most part, director and writer Kenneth Lonergan exercises admirable restraint, allowing Affleck and Hedges to produce some of the best acting of the season.